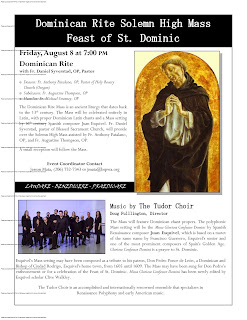 As readers know, on August 8, 2008, the Dominican Parish of the Most Blessed Sacrament in Seattle, Washington, celebrated its Centennial Anniversary with a Solemn Mass in the traditional Dominican Rite. Through the kindness of readers we now have some images of this Mass as well as a video. The celebrant was Fr. Daniel Syverstad, O.P., Pastor of Blessed Sacrament, functioning as deacon was Fr. Anthony Patalano, O.P., Pastor of Most Holy Rosary, Portland OR, and as subdeacon Fr. Augustine Thompson, O.P., S.T.M., Professor of Religious Studies and History at the University of Virginia. The Tudor Choir under the direction of Mr. Doug Fullington sang the Missa Gloriose Confessor Domini by Juan Esquivel, based on a motet by Francisco Guerrero between 1605 and 1609. The music was newly edited for this occasion. The Propers were sung from the
Dominican Gradual.

Plans for this Mass had been going on for several months, and the response and attendance was far beyond anything that had been expected. Here follow some pictures.

Before I begin the Mass photos, here is one of the statue of Our Holy Father St. Dominic, decorated for his Feast. 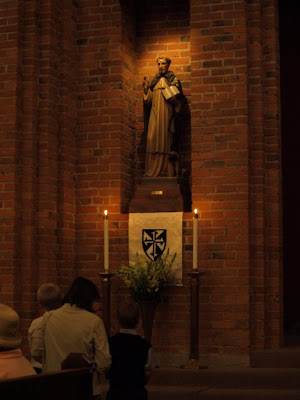 The Church of the Blessed Sacrament, a neo-Gothic edifice begun in 1910 can be seen against the evening sky if the University District, which the parish serves. The spire on the tower is easily visible from Interstate Five. 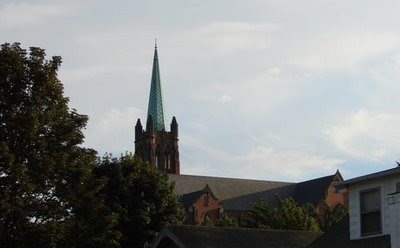 Here is a view of the interior, showing the congregation. The church, which holds 700, began to fill over an hour before the Mass and there were at least another 200 standing in the aisles, transcepts, and vestibule. 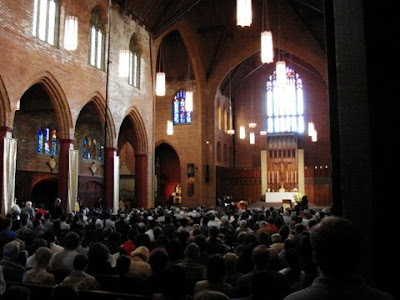 Here we seen the major ministers in procession to the altar, just as they are about to pass through the communion rail into the sanctuary. They have their amice-covered capuces up, as is our practice. You can also see that the amices are decorated with an apparal to match the albs. 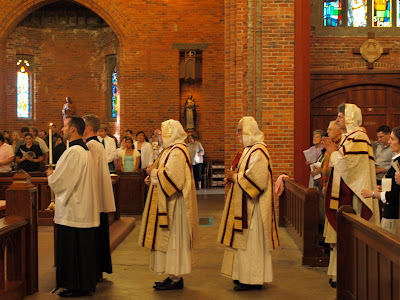 Here the ministers have arrived at the altar and just risen from genuflecting to the reserved Sacrament. In moment they will bow for the Confiteor and the acolytes will turn in, holding their candles. 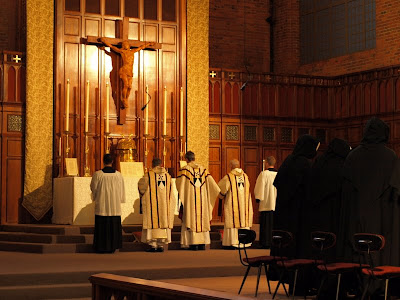 The Confiteor finished, the ministers form a line with the acolytes flanking each other below. This is the "cross" formation, which is taken by the mnisters when they are about to swing to the side, which they will all soon do for the reading of the Officium (as we call the Introit) and Kyrie at the Epistle Side. 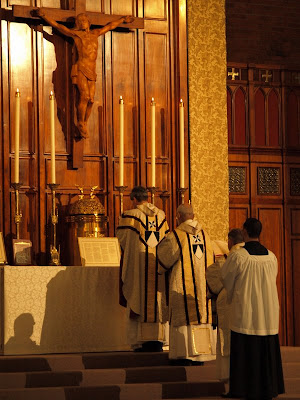 Below is a good view of the High Altar. The interior of the church, which was never completed, is in bare brick, but the sanctuary and side altars, and main altar are decorated with walnut wainscoting, the work of Fr. Christopher Moschini, O.P., pastor of the parish in the late 1960s. He was a skilled craftsman, and the carving and decoration are all his own work. He would have been in seventh heaven had he lived to attend this Mass. Fr. Moschini was deacon at the first Dominican Rite Solemn Mass I ever witnessed, at St. Albert the Great Priory, Oakland CA, in 1978. The six great candles, neo-Gothic to match . the church, were a donation by a parishioner in honor of the Centenary. In this view, the subdeacon can be seen completing a part of the preparation of the altar after his Procession with the Chalice during the Gloria. 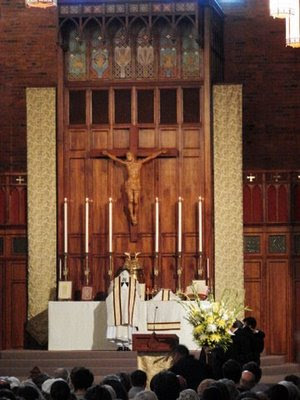 The ten assisting Dominican friars were seated as in choir on the extension of the sanctuary added in the early 1970s. Here you can see the five on the Gospel Side. In the back, in a special stall in the sanctuary is Fr. Michael Sweeney, O.P., President of the Dominican School of Philosophy and Theology in Berkeley CA, which serves the Western Dominican Province House of Studies in Oakland. He was the guest preacher. In front from the left are Bro. John Marie Bingham, Bro. Augustine Marie Reisenauer, Fr. Albert Paretsky, and Fr. Thomas Kraft. They have their hoods raised as is traditional when listening to the chanting of the Epistle.


Here we see the two acolytes, the crucifer, and the turifer in formation to begin the Gospel Procession (photo previously posted). In a moment the major minsters will join them. 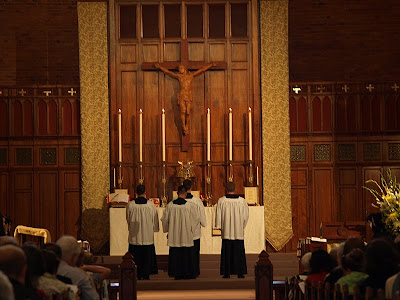 Here we see the deacon, Fr. Anthony Patalano, chanting the Gospel, facing liturgical north--the direction of darkness--and thus spreading the light of the Gospel. behind him is the subdeacon,while the acolytes hold candles and the crucifer the processional cross. The carrying of the cross at the Gospel is part of the Dominican Rite and reminds those present of the mystery of the Crucified Savior that the Scriptures proclaim. 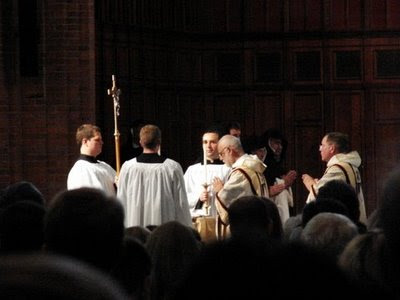 Here we see Fr. Sweeney preaching. His sermon paralleled the Church of the baptized as the agency for accomplishing the unfinished Salvation of the World with the task of the Dominican Order to preach the Gospel to people who have yet to hear it, and both with the challenge to parishioners presented by the still unfinished church of the Blessed Sacrament. He charged us as baptized Catholics, Friars Preachers, and parishioners, to take responsibility for Christ's mission, each according to our state of life. 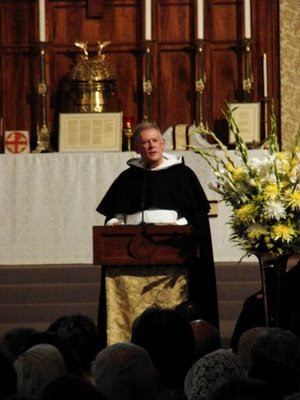 Here is another one of Fr. Michael preaching, which gives a good view fo the altar. Notice the covered chalice resting on the humeral veil. It was brought in procession to the altar by the subdeacon during the singing of the Gloria. 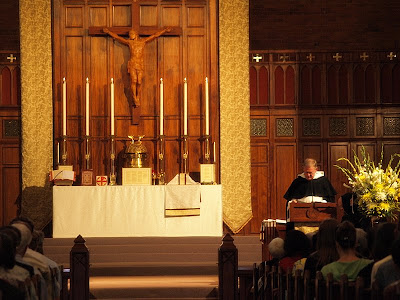 Here the celebrant, Fr. Daniel Syverstad, O.P., has turned to greet the congregation with the Dominus Vobiscum that introduces the Offertory. The ministers are in the "cross formation" and you can just see the deacon, Fr. Anthony-M. Patalano, O.P., lifting the front of Fr. Daniel's chasuble, something done whenever the priest raises his hands at a greeting facing the people. 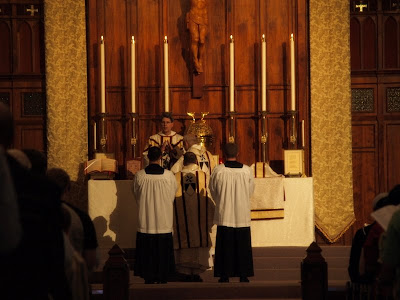 Here we see the ministers in the "triangle" formation, just before the Elevation. The deacon is holding in his right hand the censer, with which he will incense during the elevation, while he holds up the back of the chasuble with his left hand. The acolytles hold their processional candles (our form of elevation torches) and the thurifer kneels between them to complete the "triangle." The subdeacon, of course, kneels quietly, holding the paten under his humeral veil. 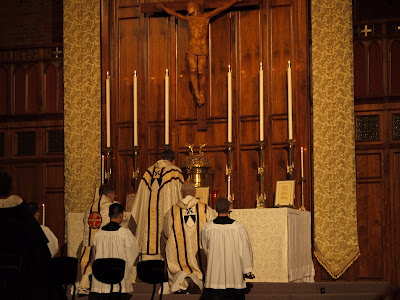 Here we see the celebrant kissing the Pax Instrument. He has just dropped the particle in the chalice and kissed it. The deacon will then take the Pax to the subdeacon. 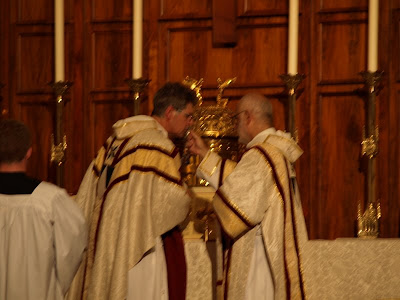 Here is a closer view of one of the two new Pax Instruments presented to Blessed Sacrament Parish in honor of the Anniversary. They were a gift from Fr. Anthony-M. Patalano, O.P., and Holy Rosary Parish in Portland. The instruments duplicate of those made in honor of Holy Rosary's Centennial in 1995. It shows, as you can see, the Man of Sorrows. This instrument was that used, after the Fraction to communicate the Christ's Peace from the altar to the friars. You can see this rite beginning at about 40 seconds into the next item. There the deacon presents the Pax to the subdeacon to kiss, who then presents it to the ministers. Finally, the crucifer can be seen taking it to the friars in choir. 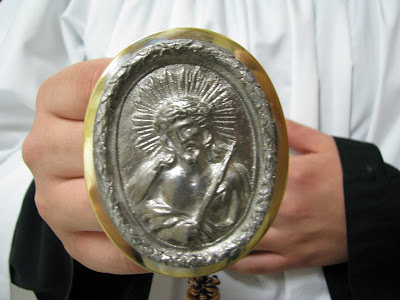 Here the ministers have taken the flanking position for the Communion Preparation. They are just bowing over for the Confiteor. In front you can see several of the 10 friars who assisted in choir. They are postrating in the venia for the Confiteor and Ecce Agnus Dei (an addition from the Roman Rite added to our liturgy in 1959). 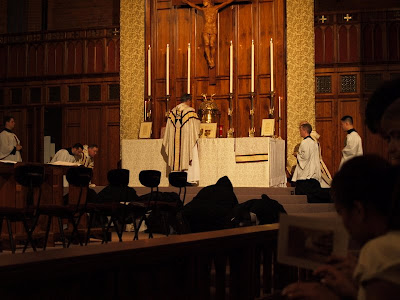 During the Agnus Dei we were fortunate to have a parishioner taking a video . In it you can hear the Tudor Choir chanting the Agnus Dei by Esquivel while the ministers perform their functions from the Fraction to the Communion Preparation Rite.

To give again some idea of the crowed church, here is Fr. Thomas Kraft, O.P., parochial vicar at Blessed Sacrament distributing Communion at the rail. 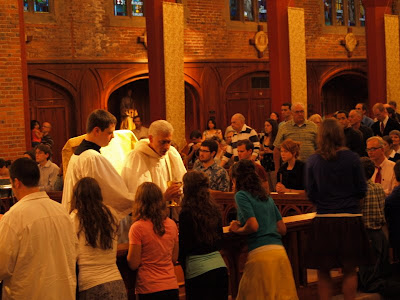 Here we see the deacon and subdeacon holding the water and wine cruets for the Ablutions. When the priest has consumed the these, the deacon will fold the corporal and put it in the burse, and the subdeacon will dry and remake the chalice. Then he will take it all to the sacristy. 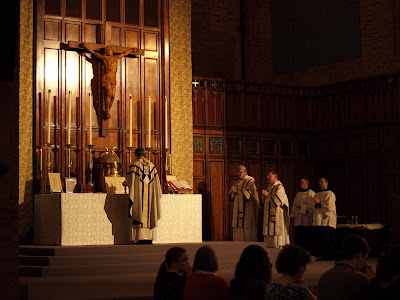 We close with a shot of the procession leaving the sanctuary. 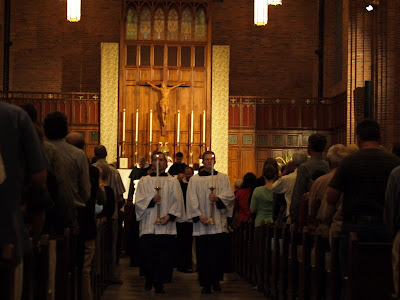 Thanks to Major Autem His Est Caritas, Mr. Jesson Mata, music director of Blessed Sacrament, and Mr. Pat Bucy, as parishioner there, for these photos and the video; and thanks to our reader, Mr. Lawrence Lam, who was the thurifer for the Mass, for the photo of the Pax.
Posted by Fr. Augustine Thompson, O.P. at 4:08 PM