Thanks to on-line resources, it is now possible to compile a list of all Dominican Rite Missals published up to 1500, the period of  the Incunabula ("in the cradle") printing.  The British Library Incunabula Short Title Catalog and the Online Computer Library Center (Worldcat), have facilitated this overview.  As best we can tell, 11 printings of the Dominican Missal were produced from 1482 to 1500.  Five of these are now available for consultation in digital copies on line (linked below).

As far as I can tell, the most important of these editions are the first of 1483 and that of 1500, as these are the editions for which the greatest number of copies remain. Both are found throughout all of Europe as opposed to other printings found only in more restricted areas.  It is not surprising, given the Order's commitment to poverty, that these editions are in quatro and octavo size: smaller and more economical editions.

At the right you can see the title page of the 1500 edition of the Dominican Missal, the first with a woodcut illustration on the title page.  The pre-1500 printings of the Missal follow in order, with images of the Canon Page where it could be found.

Description: The first OP Missal published. In moderate sized quarto format, it was printed in red and black with double columns, 33 lines to the page. Judging from the extant copies, this seems to have been a large press run acquired by Dominican houses all over Europe. Signatures: a¹^(0) b-z^(8) [et]^(8) [con]^(8) [rum]^(8). Goff M636

Locations in the U.S.A:

eBook reproduction: Proquest, Ann Arbor MI, viewable on WWW at libraries that have subscribed to the service.

Description: This was a large folio edition and soon after #1, but is very rare. I have not been able to find any further descriptions. It was probably circulated mostly in Italy. Goff M637.

The Dominican Historical Institute in Rome has a copy as does the British Library, London. Other copies: Italy (2), France (1), Spain (1). It seems a copy was sold by Sotheby: Parke-Bernet 25 June 1982 lot 96.

Description: This was the first “compact” missal, issued in octavo. Printed in two columns, in two sizes of Gothic type, with the smaller, lighter gothic used for the texts to be read in unison by the community; text in black, with 2-line capitals and captions in red. Woodcuts: one full-page unshaded Crucifixion. The extant copies and the nationality of the publisher suggest that this edition circulated in northern Dominican houses, especially in Germany and Poland. Signatures: pi¹^(0) ²pi^(4) a-y^(8) A-M^(8) N¹². GW M24169

The University of California at Los Angeles has a copy, as does the Dominican Historical Institue in Rome. Other copies are found in Britain (1 imperfect), Belgium (1), France (1 imperfect), Germany (4 complete, 4 imperfect), Poland (5).

Description: This was the first Dominican missal printed in the north, at Lübeck. I was in large folio format and printed in black and red. It seems to have been purchased, like #4 by northern houses. Any copies were probably lost during the Reformation. GW M24154

Other than the copy in Stockholm, which is available on the web, there is an imperfect copy in Germany and a second copy in Sweden.

Description: This is another small format, octavo missal. Again, this publication involved the Ventian printer Octaviano Scotto, who also published a number of Dominican authors (St. Albert’s incunabula edition of Thomas Aquinas is by him). The circulation seems to have been in southern Europe mostly, especially in Italy. Goff M639

Locations: In the U.S.A:

There is also a copy of this edition in the Dominican Historical Institute in Rome. Other copies are found mostly in Italy (9) and elsewhere in Germay (4), France (2), Spain (2, including the Dominican House in Caleruega), Britain (1), Sweden (2), Poland (2), Hungary (1).

Description: Other than the format, large folio, and that this Swiss imprint of the Missal seems to have been distributed mostly in Germany and the north, I have not been able to find much else about it. GW M24152

This version is not very accessible to Americans. The only two complete versions listed are in the National Museum at Prague and the Benedictine Abbey of Scheyern in Germany. Imperfect copies are found in Germany, Finland, Danmark, and Poland.

Description: This large format folio Missal was published in Venice and is interesting for the inclusion of material on private (said) Mass. It is interesting that the earlier missals seem to have been intended for conventual celebrations. It included a woodcut and some copies are known to have been printed on vellum rather than paper. Goff M640

Locations in the USA:

Description: This small format octavo missal was published in Venice by a collaborator of Octaviano Scotto. GW M241262

Location in the USA:

The largest group of known copies are in Italy (5), plus one at the Historical Institute in Rome. Others are found in Germany (3), France (2), and 1 each in Austria, Sweden, Hungary (imperfect), and Poland (imperfect).

Description: This rare quarto edition is of interest for serveral reasons. It is the first known printing of the Missal in Iberia, and the printers are Hungarian and Polish immigrants. It is hard to say, but this printing was probably mostly distributed in Spain. GW M2416410

Location: there is only one know copy, imperfect, in the library of the Cathedral Chapter in Burgos, Spain.

Description: This compact octavo editon has a woodcut of St. Dominic walking carrying lily and crucifix on the title page, probably the first so decorated. After the first printing of 1482, this seems to have been the largest, at least in terms of copies preserved. It is interesting that again the printers are immigrants, this time, Germans to Italy. Not surprisingly, the largest groups of copies are found in Germany and Italy. Goff M641

There is also a copy in the Dominican Historical Institute in Rome and in the British Library in London. Otherwise, most copies are in Germany (9, 1 imperfect), Italy 6, one imperfect), Britain, (2 and some fragments), Belgium (2, 1 imperfect), France (1 at the Dominican house in Toulouse, 2 others imperfect), and 1 each in Austria, Sweden, and Slovinia.

GW = Gesamtkatalog der Wiegendrucke. Stuttgart, etc., 1968- [in progress]. As the most commonly used catalog generally, I give references to this when Goff has not. Handwritten original is online at: http://www.gesamtkatalogderwiegendrucke.de
Posted by Fr. Augustine Thompson, O.P. at 5:35 PM 1 comments


Those readers who live in the San Francisco Bay Area may also be interested in local celebrations of the Traditional Dominican Rite. This academic semester, they will be occurring in four different venues, three in the East Bay and one in San Francisco proper. These Masses are celebrated by priests of the Western Dominican Province and usually served by student brothers of the province. All celebrations are open to the public.

Those attending these Masses may wish to purchase their own copies of the Dominican Rite Pew Booklet with the Ordinary of the Mass in Latin and English.  One may do so at Dominican Rite Publications.

*How to find Canyon Carmel, which has no street number: from Canyon U.S. Post Office (99 Pinehurst Road), go north about one half mile to “John McCosker Ranch Road” on right (easy to miss); take this mostly gravel private road up to the right turn onto “Old Home Ranch Road,” which is signed for “Carmel.” It ends in the parking lot of the monastery.
Posted by Fr. Augustine Thompson, O.P. at 10:29 AM 0 comments 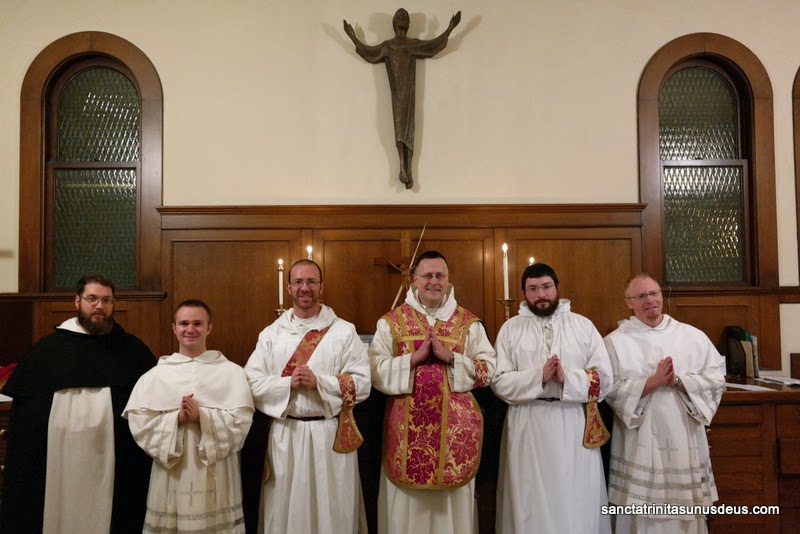