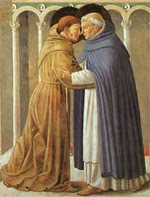 Every once in a while I get an email asking where to find the text and music of the Devotion to Saints Dominic and Francis traditionally sung during the thanksgiving after the main meal on those saints' respective feasts.  There is a old tradition of Dominicans inviting the local the Franciscans to dinner on the Feast of St. Dominic and the Franciscans inviting the local Dominicans on the Feast of St. Francis, and this chant was part of those festivities.  So this text is also known to Franciscans.

I remember hearing it back when I was a novice back in the 1970s, but could never find a copy.  A couple days ago, I was looking for a chant in the Processionarium S.O.P. and there it was in the appendix!  So I made up a version that can be downloaded here.

The text is actually an antiphon: Seraphicus Pater Franciscus et Apostolicus Pater Dominicus: ipsi nos docuerunt legem tuam, Domine.  ("Seraphic Father Francis and Apostolic Father Dominic: they taught us your law, O Lord."), sung with the Psalm 117 and a Gloria Patri.  The music is simply the Dominican Rite Psalm Tone VI.  So it is not at all hard to learn.  When the chant is sung on the Feast of St. Francis (at the Franciscan house), St. Dominic is named first.

St. Dominic's feast is coming up next month (August 4 in the traditional calendar, August 8 in the new calender), so this good time to make this chant available.
Posted by Fr. Augustine Thompson, O.P. at 1:06 PM 1 comments

I am pleased to announce that we are making available on our left sidebar an Index of  the Antiphons found in the chant books of the Dominican Rite.  This index will be useful for those seeking the Dominican music for antiphons to use in the new Roman rite, as well as those who want to compare the Dominican music with Benedictine, Roman, or other Latin religious order Rites.  The closest relative to Dominican chant is that of the Premon-stratensians, both of which are derived mostly from Cistercian models.


Modern Roman-Benedictine chant books often have indices for the various chants, but the most important Dominican chant books for the Office—the Antiphonarium of 1863 (with night office), the Antiphonarium of 1933 (no night office, post-Pius X psalter), and the Matins book of 1936 (major feasts)—have never been indexed or the index is found in a separate, hard-to-find, pamphlet.  All the antiphons of these books are in our new index.  This index also includes all the antiphons found in the Dominican Processional, the Holy Week Books of 1949 and 1963, the Gradual, and the Compline book.


The links to the index are available here at Dominican Liturgy on the left sidebar under Dominican Rite Texts—Downloadable.  The text of the first version is numbered straight through; that of the second is arranged in booklet format for double-sided printing.


Note: The Dominican cloistered sisters of Prato (the community of St. Catherine de' Ricci, O.P.) are wearing white veils and no scapulars because they were and are technically members of the lay penitents ("Third Order"), not nuns ("Second Order").
Posted by Fr. Augustine Thompson, O.P. at 10:38 AM 0 comments