Dominican Rite on the West Coast 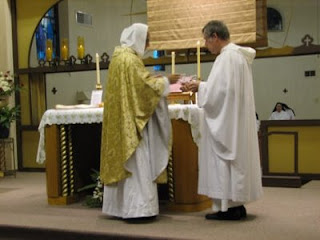 In a few days I hope to have reports on the Dominican Rite Solemn Mass at Blessed Sacrament Church in Seattle WA. That Mass was celebrated yesterday as part of the festivities of the Centennial Anniversary of the parish. The attendance was a great surprise and delight to all. There were nearly 900 people in attendance in a church that can hold just under 700. The pews had began to fill an hour before the service. The polyphony and Dominican chant by the Tudor Choir was spectacular and the sermon by Fr. Michael Sweeney, O.P., President of the Western Dominican School of Philosophy and Theology in Berkeley, serving our House of Studies, was not only theologically profound but witty and challenging. This Mass was not only the first time that the pastor, Fr. Daniel Syverstad, O.P., had celebrated the Dominican Solemn Mass, it was also his first public celebration in Latin--he had been preparing for over two months. I have reason to believe will not be his last.

Since I am still waiting for pictures from the photographers at Seattle, I thought I would take the opportunity to share two images from the first Dominican Rite Mass in nearly 40 years at the Monastery of Our Lady of the Angels, home of the Dominican cloistered nuns in Hollywood, Los Angeles. This Low Mass was celebrated for the sisters on Saturday, August 2, by Fr. Anthony-M. Patalano, O.P., pastor of Holy Rosary Church in Portland. He was served by Fr. LaSalle Sean Hallissey, O.P., prior of St. Dominic's Priory in Eagle Rock, Los Angeles, who wears an "Old English" surplice that was a special gift to him. In the image to the above left, you can see Fr. LaSalle ministering the water and wine at the preparation of the chalice, which in our Low Mass comes before the Prayers at the Foot of the Altar. As you can see, Fr. Anthony still has his amice-covered capuce raised. He will lower it just before the prayers. Through the nun's choir screen in Art Deco style (the monastery was built in the 1930s) you can see three of the nuns. The wooden screen panels can be seen to the left: they have been opened for the celebration of Mass as has always been the custom. Our Domincian Nuns practice Perpetual Adoration of the Blessed Sacrament, and you can see the shade covering the monstrance in the center above the opening to the choir. The cover is removed outside of Mass times. 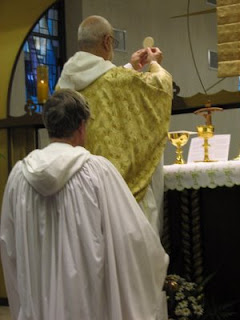 In the second photo to the right you can see Fr. Anthony elevating the Host, with Fr. LaSalle ringing the bell and lifting his chasuble. The top of the nun's screen is visible behind the altar. That monastery altar has always been free-standing, with the nuns behind it and a small nave for lay people before it.

I would like to thank those who attended the Seattle Mass who have, over the last twenty-four hours, sent me numerous emails or posted comments expressing appreciation of the liturgy and the music.

Tomorrow morning at 11 a.m. here at Holy Rosary Church in Portland I will serve as deacon for the second Dominican Rite Solemn Mass this week. Celebrant will be Fr. Patalano, and serving in the role of subdeacon will be Bro. John-Marie Bingham, O.P., a student from our House of Studies. If any readers are present, please introduce yourselves!
Posted by Fr. Augustine Thompson, O.P. at 7:55 PM

Labels: Monastery of the Angels

Wasn't the wearing of the capuce during the making of the chalice abolished in the 1960 revision of the rite.....just something I remember one of our friars saying when he was celebrating the OP rite

I don't think so. I do not find anything on the use of the capuce in ASOFP, 35, "Rubricarum Instructum" (SCR Prot. N. O. 126/960--21 Jul. 1960), which is where the Communion Confiteor was dropped. It would be strange if the change was made then since the use of the biretta (which is parallel) in the Roman Rite was not dropped till after 1962 and most of our changes simply adopt Roman changes. I believe the dropping of the capuce rubric came with the moving of the chalice prep to the Offertory in 1963. If you have a text on the change, let me know.

In any case, just as it is very common to ignore the rubric abolishing the Communion Confiteor, I don't see what harm keeping the capuce up would cause. But then I am not a fanatic about rigid rubricism.