At the request of a reader and as a permanent record of the events, we are presenting here photos of the installation of Fr. Augustine Thompson, O.P., as Master of Sacred Theology at St. Albert the Great Priory, Oakland CA, the House of Studies of the Western Dominican Province, on the patronal feast, November 15, 2008. If readers would like to consult a copy of the ritual for the ceremony, it is available for download here.

Here is a picture of the chapel prepared for the installation. The Master's Cathedra or Chair is in the center of the presbytery. The altar is dressed from the Missa Cantata that preceded this ceremony. The friars may be seen in the stalls, and there are secular academic vistors in their robes on the left. 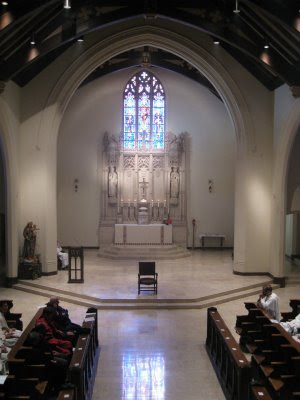 Here we see the V. Rev. Fr. Richard Aquinas Schenck, O.P., S.T.M., who conducted the ceremony by delegation from the Master of the Order. He has taken his place in the Master's Cathedra. He wears the insignia of his office, the four-cornered biretta trimmed in purple and the master's ring. You cannot see it but he is also wearing the hood of his highest earned degree, the Doctor Theologiae from the Ludwig-Maximilians-Universitaet (University of Munich), as is the custom in our province. Fr. Richard is the Regent of Studies of the Western Province and Professor of Philosophy and Theology at D.S.P.T. and the Graduate Theological Union in Berkeley CA. 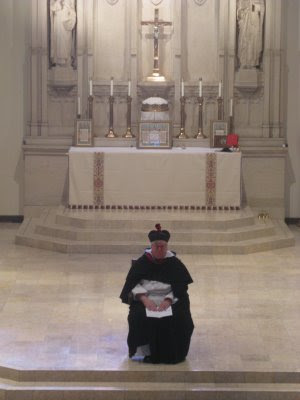 He has now been joined on the left by the V. Rev. Fr. Gerald Buckley, O.P., prior of St. Albert's, wearing the insignia for his theological degree from St. Albert's College, now known as the Dominican School of Philosophy and Theology, the educational establishment of the Western Dominican Province. Representing the prior provincial, he will present the ring. To the right is Fr. Gerald Fogarty, S.J., William R. Kenan, Jr., Professor of Religious Studies and History at the University of Virginia, a colleague of the new S.T.M. He wears the insignia of his Ph.D. in history from Yale University and holds the biretta for the ceremony. In this photo, we see the new S.T.M. making his profession of the Catholic Faith. You can clearly see the new S.T.M.'s academic hood, that of the University of California, Berkeley, where he received his Ph.D. in medieval history. 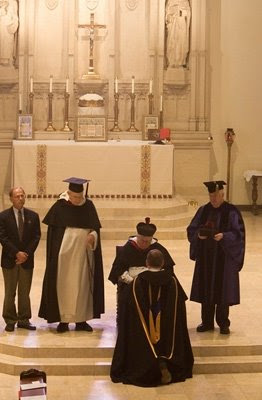 In this photo Fr. Richard is placing the ring on the new Master's finger, symbolizing his marriage to Holy Wisdom. To the left one can see Dr. Christine Sundt, of the University of Oregon, who designed the ring and her husband, Richard Sundt, Professor of Art History. Both were the new S.T.M.'s colleagues when he taught at the University of Oregon. 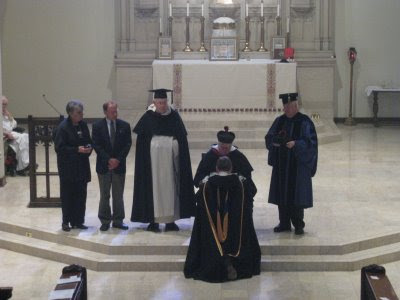 Here are two images of the ring designed by Dr. Sundt and engraved and set by Todd Daniels. To the left one can see the shield of the Western Dominican Province, on the right the stone, an amethyst and the shield of the Dominican Order. The initials of the seven S.T.M.s in the history of the province are on the inside of the ring's band. Initials will be added for future S.T.M.s as they are created. 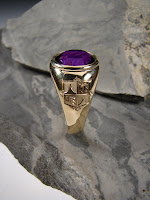 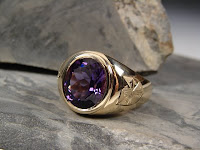 Here Fr. Schenk has placed the new S.T.M. in the cathedra and is reading the formula of installation: 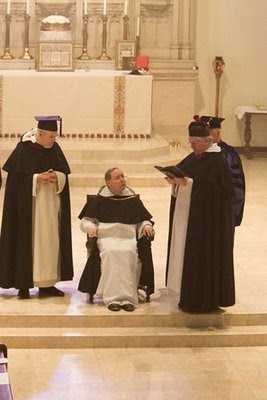 The new Master rises and receives the Kiss of Peace from the other Master present. 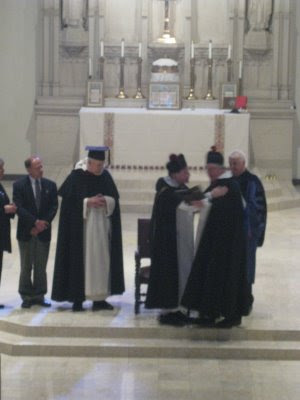 Finally, a photo of the beautiful chapel of the House of Studies, with the new Master giving his Inaugural Lecture, "The Soul You Lose May Be Your Own: Historical Reflections on the Task and Temptations of the Theologian." This lecture will eventually be posted in text and video on the web site of the Western Dominican Province. 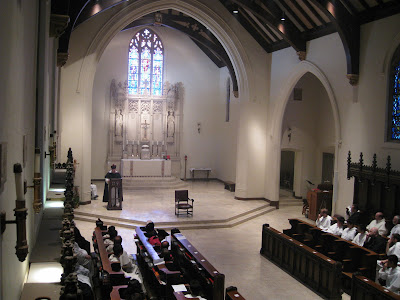 Congratulations on your installation as Master of Sacred Theology. You look great in the pictures, and awesome with your regalia. You are truly an inspiration for me.

I'm brasilian but I meet the O.P at Berkeley as student at DSPT. To see these pictures was really a inspiration for me, as I believe you will be a inspiration for many dominicans brothers here in Brasil. Well, we hope and pray for that. I will add this new on my blog!