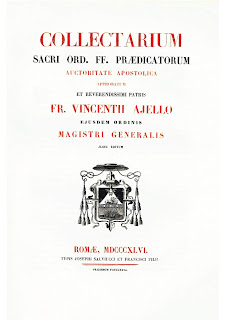 Dominican Liturgy Publications is happy to announce a reprinting of the Collectarium Sacri Ordinis Fratrum. Praedicatorum, but before describing this new edition, readers may be interested in knowing what this volume actually is.  When Humbert of Romans promulgated the prototype of the Dominican liturgy in 1256, his exemplar contained fourteen distinct liturgical books.  Among them was the Collectarium. That book contained all the texts and music needed by the friar leading the Divine Office for the week, that is, the "hebdomadarian."

As such, along with the hebdomadarian's parts that remained constant (such as Deus in adiutorium meum intende, the Preces, the blessings at Matins, etc.), it provided, for the ferial, the propers, and the commons, the "little chapters" of Lauds, Vespers, and all the Little Hours (then sung by the hebdomadarian in his stall, turned toward the high altar),  the verse between Matins and Lauds, and all the collects of the year. It also included the music for the incipit of those antiphons intoned by the hedomadarian rather than the cantors: those of the Benedictus, Magnificat, and the Vespers Psalmody when the Psalms were sung under a single antiphon. The volume was prefaced by extended rubrics for the calendar, Solemn Lauds and Vespers, and the manner of incensing the altar and the friars.

The last edition of the  Collectarium was printed in 1846, and two supplements were issued in 1880 and 1934 to bring it up to date. Both are included in this reprint.  In addition, this printing includes an additional supplement providing all the changes and additions made from 1934 to the present. The printed Collectarium also included many items not found in Humbert's exemplar.  For example: grace at table with music, various blessings (including some that are hard to find, e.g.. of a pilgrim's staff and bag), Communion of the Sick, the rites of Extreme Unction, Commendation of the Dying, funeral services, and the Office of the Dead. Dominican Liturgy Publications has already published a modern a version of this book in English for use with the modern Liturgy of the Hours in choir. Even those who do need this book for the Dominican Rite choir office will find it an excellent addition to their liturgical collection and useful for all the other material included.

Those interested in this publication can read about it and order it here. Although care was taken in scanning this book, which is printed with rubrics in red in a casewrap hard cover, the original was not always very clear. Before purchasing those interested should check to preview to determine if the reproduction is suitable to their needs.
Posted by Fr. Augustine Thompson, O.P. at 12:33 PM 2 comments