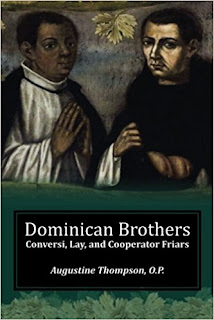 Although it might seem that my newly published book on Dominican lay brothers (now called "cooperator brothers") would have little to do with Dominican liturgy, it, like my book on the religious life of the medieval Italian cities, Cities of God, actually has a large liturgical component.

In Dominican Brothers: Conversi, Lay, and Cooperator Friars (Chicago: New Priory Press, 2017), I discuss the pre-Vatican-II "Office" of the brothers, that is their recitation of differing numbers of Pater nosters during their attendance at the cleric's choral office, the forms of their suffrages for the dead. and their sacramental and ritual life. In addition, I trace their work as the architects of churches, most famously of Santa Maria Novella in Florence, and as sacristans.  For the early modern period, I trace the central role of the brothers in introducing the common recitation of the Rosary by all the friars in choir.

The book also includes behind-the-scenes descriptions of the debates on the transition from the Latin Divine Office to the nearly universal use of the vernacular, in which the desire to involve the brothers more directly in the liturgical life of the Order played an important role.  For this part of the history I draw on unpublished documents in the General Archives of the Order in Rome.

In addition to liturgy, the book describes many other activities of the brothers in social service, the missions, maintaining our houses, and teaching, as well as their countless martyrs in Asia, Eastern Europe, and during the Spanish Civil War. The image on the cover shows the two most famous Dominican brothers saints, Martin de Porres on the left and Juan Macias on the right.

This book would make a very suitable Christmas gift for any Dominican priest or brother. Dominican Brothers can be ordered here.
Posted by Fr. Augustine Thompson, O.P. at 8:36 AM 0 comments

Just in time for Christmas!  I am delighted to announce that Breviarium S.O.P. has completed the 2018 Dominican Rite Calendar for praying the 1962 Dominican Breviary. Once again, the calendar includes notations for the 15 Tuesdays devotion to Our Holy Father St. Dominic. You can purchase you copy of this Ordo at Dominican Liturgy Publications.


The format is similar to that of the Ordo published by the Priestly Fraternity of St. Peter for the Extraordinary Form of the Roman Rite.  The calendar contains the entire liturgical year, according to the 1962 Breviarii Iuxta Ritum Ordinis Preædicatorum, updated with the most recent canonizations of Dominican saints. 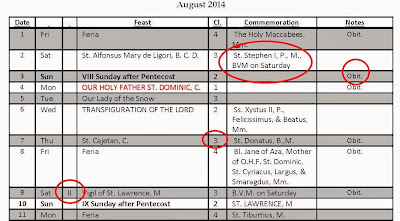 In addition, the obituaries of the Masters General and the anniversaries of the Order are given, as well as the list of Dominican blesseds and the day of their votive office.  Reminders are given for days when members of the Dominican Laity (formally called the "Third Ordo") can obtain indulgences during the year. As in the past the Office of Prime is also included.

Each day is annotated with the feast, the rank, commemorations (if any), and reminder notes, if the day includes an anniversary or the obit of a Master General of the Order.  The list of obituaries of the Masters General has been updated to include the Masters who have died since the last Dominican Breviary was published in 1962.