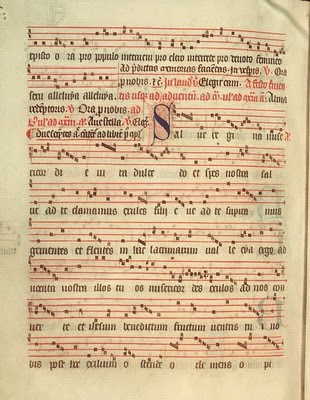 To the right you can see the folio 935v of the Poissy Antiphonal. This manuscript is accessible on line at Latrobe University in Australia. This manuscript belonged to a convent of Dominican nuns in France. It was transcribed in the period 1335-1345 and is a "certified" Dominican Antiphonal. That means that it was not only written by the medieval Dominican method of painting the neumes using an authorized stencil, but that the music was sung through by two friars or sisters using the "new" book against two other friars or sisters using an older "certified" book. This made sure that all medieval Dominican chant books were absolutely identical. No other medieval chant books of any other musical tradition were so perfectly identical. I have reviewed this so that you can all be sure that this is music is exactly as the medieval Dominicans chanted it.

Even a non-paleographer can see that in the first line of the Salve of this manuscript the modern version's word "Mater" is absent. This is the original form of the Salve Regina, as found in all the medieval chant and manuscript traditions. The word "Mater" was only added in the sixteenth century. Those who know the polyphonic music of Orlande de Lassus (ca, 1532-1594) may have sung his setting of the Salve, where this word is missing. You will notice how smoothly the chant moves from "regina" to "misericordiae." The original form, very medieval in piety, was thus: "Hail Queen of Mercy." 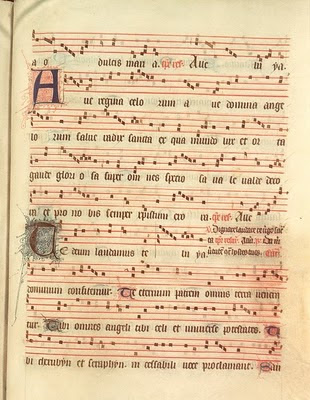 At the right, we see the next page of the manuscript, folio 936r. Here you can see another place were the medieval version differs from both the modern Roman and the Dominican versions. The word "Virgo" is absent, and so the last line of the antiphon reads simply: O dulcis Maria. The immediate focus on the Holy Name is also very medieval. The alleluia, which has exactly the same chant as the version sung by modern Dominicans during Easter Time, follows. This addition of "Virgo" to the original chant of the Salve seems to have appeared in the thirteenth century, but, again, the Dominicans, typically traditional about chant and text, did not add it until much later. In fact, this manuscript, where as you can seen in faint addition on the previous page's left margin has "Mater" and the altered music added in a sixteenth-century hand, does not have any suggestion that "Virgo" should be added at this point. A comprehensive study of the manuscripts and early printed editions of the Dominican Salve would have to be done, but I suspect that the medieval version of the Dominican Salve did not receive these textual and musicial changes until the 1600s. Perhaps during the Romanizing reforms of 1604.

A PDF file with this medieval version of the Salve may be downloaded here. I would wonder if Dominican readers think that we should restore, at least for occasional use, the Salve as it was sung from the time of Humbert's standardization of the liturgy in 1254 until the Post-Reformation period, which was also the way that St. Thomas, St. Catherine, and St. Vincent Ferrer, and probably Our Holy Father Dominic actually sang it?
Posted by Fr. Augustine Thompson, O.P. at 8:50 PM

The Carthusians sing the Salve with the Mater and Virgo absent.
No, I don't think we should go back to it because there is something wonderful that we call our Lady the MOTHER of mercy.
Perhaps St. Dominic and our early saints would have welcomed these changes since they give greater honor to our Lady!

Also, the Mozarabic Rite (in the Missale Mixtum) has the Salve Regina sung/said at the end of every Mass. "Mater" is also absent (thanks Father for the information about it!), but has "Virgo semper Maria" at the end.