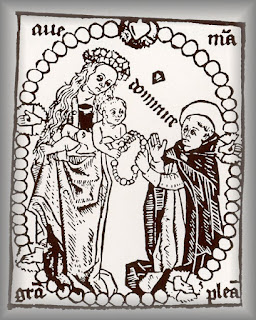 So, my conclusion is that the custom of wearing a habit Rosary become more or less universal  in the late 1600s.  It certainly was so by the 1700s, as I know of no images of Dominicans from that century or later without it.  If, however, anyone knows an image of that late date showing a Dominican without a habit Rosary, let me now and I will add it to this post.
Posted by Fr. Augustine Thompson, O.P. at 5:27 PM

Honored, Friar Augustine, that my question provoked your skillful research. Thanks for that!

Was Bl. Alain de la Roche the earliest Dominican to write about the Rosary?

Yes. As far as we know, he was the first Dominican to write about the Rosary. And he seems to be the origin of the story that Our Lady appeared and gave the Rosary to St. Dominic. The error is probably the result of Alain's confusion of St. Dominic of Prussia with St. Dominic Guzman. Dominic of Prussia, a Carthusian, as far as we can tell, was the first to join the 15 mysteries with the repetition of Hail Marys and Our Fathers.