Thanks to communications and help from Dominika Krupinska, a member of the schola that sang for the Mass, I am pleased to present a report on the Dominican Rite Missa Cantata celebrated in Cracow, Poland, on Sunday, July 1st, 2012, the Solemnity of the Most Precious Blood of Our Lord Jesus Christ.
The celebration of this Mass, of which photos follow below, took place in the small Gothic style church of St. Giles at the foot of Wawel Hill (the seat of Polish kings), which has belonged to the Dominicans since the canonization of St. Hyacinth in the XVI century. The music for the Mass was led by the Schola Gregoriana Silesiensis of Wroclaw, directed by Mr. Robert Pozarski.
The celebrant was a Polish Dominican, Fr. Lukasz Misko, O.P., who has worked in the Western Dominican Province of the U.S. for several of years. He learned the Dominican Rite while assigned to Holy Family Cathedral in Anchorage AK, where the Missa Cantata is celebrated very Sunday of the year at 4 p.m.  Fr. Lukasz will return to the Western Province in the fall and be assigned to Blessed Sacrament Church in Seattle WA, where the Dominican Rite is also regularly celebrated.
As the schola carefully distinguishes between Sacred Liturgy and Concert Performance, every attempt was made to allow congregation participation in the music, and to help comprehension of the prayers and lessons.  A beautiful booklet hand-missal was prepared containing all texts in Latin and Polish and the music of Mass.  I understand, in the words of Dominika that "The church was full of music. It was a real Missa Cantata!"  A copy of the program can be downloaded here.
This Mass is only part of the revival of the Dominican Rite in Poland. At the Song of Our Roots Festival in Jaroslaw each summer the Dominican Rite Divine Office of Matins-Lauds and Vespers is sung regularly by those attending. Thus Dominican chant is gaining popularity among chorale singers and those devoted to traditional and ethnic music all over Poland.
MASS OF THE PRECIOUS BLOOD, JULY 1, 2012
The Asperges
(The cope is not worn for this ceremony in the Dominican Rite) 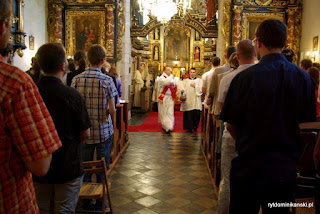 The Prayer Actiones Quaesumus
(Recited by the priest before descending for the Prayers at the Foot of the Altar.) 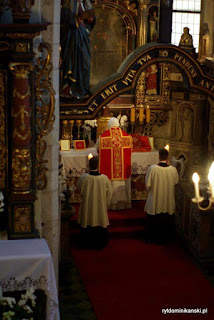 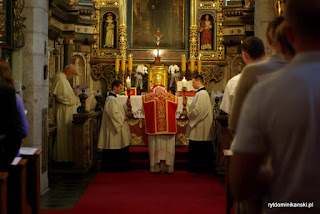 The Gloria
(Intoned at the center of the Altar in the Dominican Rite, ministers will then swing right) 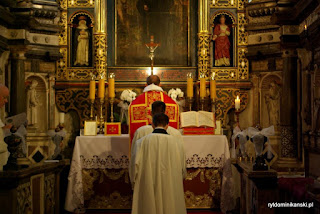 The Epistle
(Note the number of people present) 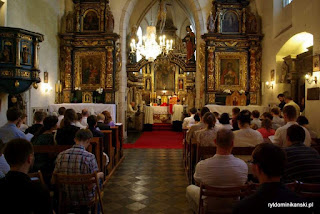 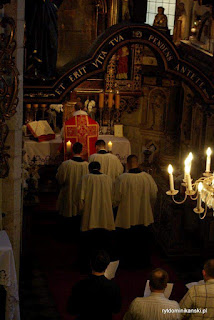 The Homily
(by Lukasz Misko, O.P., from the wall pulpit of the church) 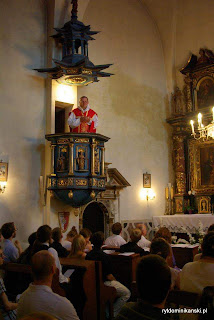 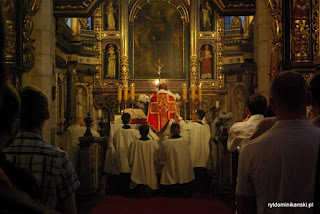 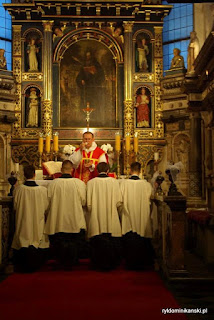 The intention for the Mass was for God’s blessing for people and groups promoting the revival of the Dominican Rite in Poland. Some 100 attendants from Cracow, Warsaw and Wroclaw were present for the Mass, some traveling 300 km to participate. It is expected that, when Fr. Lukasz comes to Poland for his vacation next year, this event will be repeated.

I thank Dominika Krupinska for help in preparing this report.
Posted by Fr. Augustine Thompson, O.P. at 2:26 PM