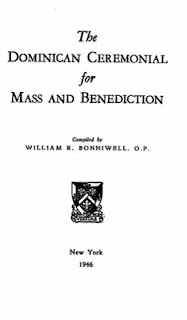 I am delighted to announce that Fr. William R. Bonniwell, O.P.'s Dominican Ceremonial for Mass and Benediction (New York: Comet, 1946) is finally available for download on the left sidebar under "Dominican Rite Texts." We are indebted for this scan to Fr. Paul Keller, O.P. This completes the presentation of the three rubrical works for celebration of the Dominican Rite most useful for English speakers: the others being the Jandel Caeremoniale [Latin] of 1869 and the St. Joseph Province Altarboys' Manual of 1945. Both also available in the same place.

Although Fr. Bonniwell describes some practices that seem particular to the American Eastern Province (e.g. the use of the Roman order for lighting altar candles), the rubrics explained faithfully reflect those of Jandel and the Missal of 1933. None of the practices described here were modified by the rubrical reforms of 1961-62, with the exception of the suppression of the Communion Confiteor and imposition of the Roman Ecce Agnus Dei, and the use of Benedicamus Domino in place of Ite Missa est on ferials and lesser feasts. Other changes at that time principally dealt with the calendar and multiple collects, topics not discussed in this book.

This ceremonial is especially useful for the parallel tables presenting the actions of the major minsters at Dominican Solemn Mass.
Posted by Fr. Augustine Thompson, O.P. at 1:00 PM

Thanks Fr. I hope I can find the time to start reading this book. BTW, I am almost done with the Vesperale novum (at last!), I expect to send my comments to your e-mail address.

I will keep praying for you.