Prostration on the Forms 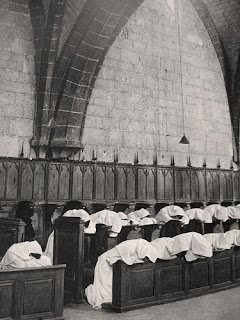 The practice of Prostratio in Formis ("prostration on the forms"), or simply Prostratio ("prostration"), is probably as old as the Dominican Order and rubrics on it are found in the Ordinary of the Humbert Codex (1256), the codification of the Dominican Rite. The rubrics on this rite were codified in their modern form in the Jandel Caeremoniale of 1869, nn. 781ff., which I will outline. Prostration on the Forms is made by kneeling, with the capuce raised, in the choir stall and bowing over the kneeler of the stall, with the head inclined. You can see this gesture in the image to the right, which shows the practice in a French Dominican house during the 1950s. When there is no "form" or kneeler, the gesture is made by kneeling on the ground and bowing low.

The use of prostration on the forms continued in the Dominica Rite until the reforms of 1963, when the prostration was replaced by simple kneeling. At that date the elaborate rubrics for raising and lowering the capuce were also abrogated. It is interesting that after the Order's adaption of the Roman Rite, the Proprium Ordinis Praedicatorum of 1982, which provides for elements of our ancient liturgy that may be retained in the New Roman Rite, we find in the section on the Liturgy of the Hours, in "Indicationes pro Celebrationibus Liturgicis," n. 38, on p. lxxxiv: Pro opportunitate, fratres in quibusdam occasionibus possunt etiam prostrationem facere. I might mention that I have never seen Prostration on the Forms used with the modern Office, but this rubric sanctions its use. There is nothing in the Proprium to indicate that it may be used at Mass. No specific occasions are given, but, if this practice is to be used, the traditional norms of Office may give some guide. For historical interest, however, I will describe the use of Prostrations for Mass as well as Office in the traditional rite.

Prostration, like kneeling, has, in the Order and the Church, a dual meaning. It is a penitential gesture of humiliation, as modern liturgists never ceasing reminding us, but it is also a gesture of adoration, without any penitential significance. Its use reflects that dual quality both as to liturgical days and parts of the liturgy. Most generally, Prostration was used for adoration or humiliation, outside of festive seasons. This means that, in general, it was used on Ferials outside of Easter time. It was never used on Sundays from Vespers to Vespers, even in Lent--when it was used on all other days, even solemnities, like the Annunciation. It was omitted on the ferials when the O Antiphons were sung and, oddly, during the Solemn Litanic Preces of Lauds during the Easter Triduum. It was also done (outside the forms in the middle of choir) as a gesture of respect by the reader after completion of the readings at Matins.

Prostration as a penitential gesture, with no variation for the seasons, was practiced in various other rituals: during the recitation of the Seven Penitential Psalms, at the giving of the General Absolution for infractions of the Rule and Constitutions (which do not bind under sin). It was also the posture for receiving the Discipline, As an act of adoration, it was employed when the Sacrament was removed from the tabernacle in the pyx until it was restored, and when it was carried in procession past the friars, whether in or outside of choir. It was also used at General Commuions during Mass, and at all Communions outside of Mass (I have discussed this ritual in part five of an earlier post on the Solemn Mass). As a gesture of adoration, it was also done during the singing of the Passion at the mention of the Death of Christ, and at the Liturgy of Good Friday, during the singing of the Ecce Lignum Crucis, which is only sung once in our Rite.

At Solemn Mass. On Ferials inside and outside of Lent, except in Easter season, the prostration was made during the Opening Collect and the Postcommunion Collect at Solemn Mass, otherwise the friars simply bowed. During Lent (except Sundays) and all vigils (except those of Christmas and Epiphany), from the completion of the singing of the Sanctus until the Agnus Dei, those in choir prostrated on the forms. This was not only an act of adoration and humility, but also an act of self-denial since it meant that the friars could not look up to see the Elevation. I suspect that this long prostration was the original practice during the Consecration. The Elevation of the Host is first witnesses in Paris in 1205. The Dominican Rite add the Elevation of the Chalice only in the late 1200s. The introduction of the Elevations was to provide visual contact with the Blessed Sacrament, and our rubrics provide for this. Outside of the times just listed, the prostration was made only from after the Elevation of the Chalice until the singing of the Pater Noster. I might add that the celebrating priest and other ministers never made the Prostration during Mass.

At Divine Office. In the Ferial Office, the Prostration was made: 1. During the silent Pater and Credo preceding Office; 2. At the doxology after Deus in Adiutorium; 3. At the Preces (including the Pater Noster) before the Final Collect; 4. During the Confiteor at Compline and Prime. Dominicans who want to incorporate this ancient practice in the modern Liturgy of the Hours following the suggestion of the Proprium, might first consider its use at the Confiteor of Compline (where the Proprium already specifies kneeling) and then during the Intercessions and Our Father at Lauds and Vespers in Lent. This does not, of course, exclude other possibilities.
Posted by Fr. Augustine Thompson, O.P. at 1:39 AM

Labels: Prostration on the Forms

We have photos of the sisters prostrating over the forms and they have thier arms crossed over their breast.
I suspect that in the cloisters the prostration during the Elevation wasn't especially self-denial because they really couldn't see anything anyway.

The only time I see a remnant of the prostration is when we have the change of sisters at adoration.

Yes, the friars prostrated on the forms in penitential seasons immediately after the Deus, for the Gloria Patri and the Sicut erat. They rose at for the entoning of the antiphon and psalm. Then the side opposite the cantor sat (as usual).

I will put a posting on inclinations on my list. I am currently working on the post on capuce rubrics.