The Old Attire of Dominican Prelates 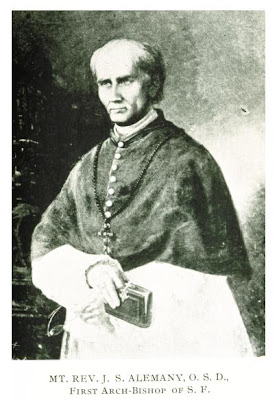 A recent posting on New Liturgical Movement. showing Cardinal Christoph Schönborn, O.P, of Vienna wearing the Dominican habit instead of the usual scarlet choir dress of a cardinal suggested this short piece on the earlier practice of Dominican and other religious order prelates and their dress. Another famous example in the United States of a prelate who continues to wear his order's religious garb is Cardinal Seán P. O'Malley of Boston, who wears his Capuchin habit but, or course, with the red zuchetto. According to John A. Nainfa, Costume of Prelates of the Catholic Church According to Roman Etiquette (Baltimore: Murphy; 1909), the "common law" of the Church in the early 1900s was that prelates from religious orders "should continue to wear the habit of their Order," although he notes that more commonly they adopted the attire of a prelate in the "colors" specific to their own order. The practice of prelatial attire in order colors was abolished in 1969 by Pope Paul VI (motu proprio Ut Sive Soliciti), and since that time many religious order prelates have reverted to the practice of simply wearing their habits or wearing the usual prelatial attire, which is also permissible.

As an example of the older practice of wearing the colors, is shown to the right, where you can see a famous painting (unfortuantely not in color), of Joseph Sadoc Alemany, O.P. (1814-1888), first archbishop of San Francisco and the co-founder, with Fr. Sadoc Francis Vilarrasa, O.P., of my Western Dominican Province. In it, you can see him wearing the white cassock and black mozzetta (trimed in white) which were used by Dominicans. His mantelletta, ferraiolo, and cappa magna would also have been also black. You can also see his pectoral cross and ring. Unfortunately his purple zuchetto is not very visible in the painting. That painting, by the way is rather famous. Archbishop Alemany always refused to sit for a portrait, so when he was about to retire and one was needed, the painter hid in a confessional of Old St. Mary’s Church (then the cathedral) and would peek out while the archbishop was preaching so as to get his likeness for the painting in progress hidden inside the box. 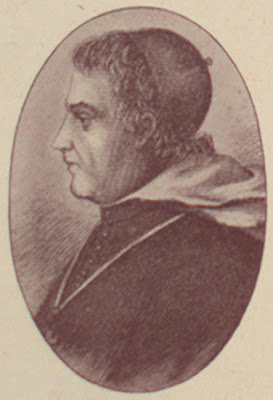 Here is another image of a Dominican prelate, but much older. It is Edward Fenwick, O.P. (1768-1832), of the Eastern Province, and bishop of Cincinnati. You will notice that he seems to have a hood which is white inside and that his mozzetta is plain black, with no white trim or bottons. I suspect that the life on the frontier in those days made getting the full outfit difficult. I suspect he is merely wearing a black mozzetta over his white Dominican habit (a privilege that is still enjoyed today on special occasions by the Dominican Province of Malta).

I am not going to hunt up examples of the prelates from other religious orders, but for those interested, here are some of the "colors" they wore: Augustinian Hermits, Basilians, and Vallombrosians: completely black; Benedictines: black with red trim; Silvestrines: blue; Camaldolese, Norbertines, Olivetans, Trinitarians: completely white; Cistercians and Trappists: like the Dominiicans but no white trim. Capuchin Franciscans: brown (with an otter-fur cappa magna in winter); all other Franciscans: ash gray (with vicuña fur cappa magna in winter); Carmelites brown, but with white where Domincans wear black; Those who want greater detail can consult Nainfa on line at: J. Nainfa, Costume of Prelates.
Posted by Fr. Augustine Thompson, O.P. at 7:51 AM

Labels: Prelates of the Order and Attire

His Lordship Anthony Fisher, O.P., one of the auxiliary bishops of Sydney, and currently busy organizing WYD, likewise wears his habit whenever he can.