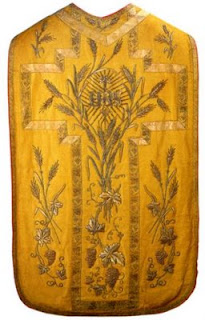 Recent discussion on the New Liturgical Movement about the proper color for tabernacle veils and antependia at Requiem Masses, moved me to do some investigation about Dominican practices. The result was something of a surprise, and nothing about it is found in Bonniwell's history of our Rite.

As it is my understanding that the debate over use of black or violet antependia at altars with tabernacles in the Roman Rite was only resolved in the mid-twentieth century, I am not surprised about the lack of clarity in the 1869 Caeremoniale. In any case, I suspect in the last century at least, many Dominican parishes probably just followed whatever the local Roman practice was. The medieval rubrics for Dominican vestment color options seem to envision this kind of accommodation to local practice. And I can assure you that not doing something the "Roman Way" can generate unpleasant comments from those who attend Dominican Rite Masses and from those who see pictures of them. The pressure on Dominicans to follow the common practice, alien to our traditions as it might be, will always be great.
Posted by Fr. Augustine Thompson, O.P. at 11:53 AM

I would much rather see Dominicans doing things the Dominican way. I like the variety of rites, as long as they are reverent, beautiful, dignified, and approved by Church authority.

I can understand why some might be suspicious of unknown differences in this post-1970 Catholic Church, but people should really inform themselves before jumping to conclusions.

Or, if someone knows the Dominican Rite is different but complains anyway because they think everything should be Roman... well, pay no attention to such people. Who do they think they are to tell the Dominicans how to celebrate Mass? The pope?

Please, my OP friends, preserve your venerable liturgy. Same goes for the Carmelites, and everyone else that celebrates a venerable and approved rite or variation.

As I suggested in the post, sometimes (not all the time but sometimes) the "Dominican way" itself is to accommodate to Roman practice, something that became pastorally useful from the time we started running parishes in the modern period.

Complaints around Dominican particularity were common before the Council, perhaps even more so than today.