I thought that some of our readers might be interested in seeing a lovely set of "Neo-Gothic / Fra Angelico" altar cards that are in the Western Dominican Province House of Studies, Saint Albert the Great Priory in Oakland. They usually grace the Sacristy, but are occasionally used at the high altar, most recently for the Solemnity of St. Albert the Great this year. The cards were calligraphed and the miniatures painted by two cloistered nuns of the Dominican Monastery in Menlo Park California for the dedication Mass of the chapel in 1948. Here is a picture of them on the high altar as it was dressed for the Solemnity:

The two smaller candles flanking the large six in this photo are the Sanctus Candles used at that Mass. Here is a closer image of the main card: 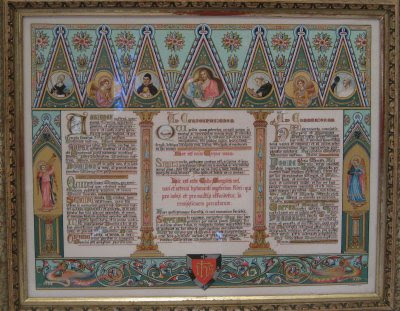 Two Fra Angelico angels grace the sides; in the bottom center is the old Coat of Arms of the Province of the Holy Name, the Western Province. In the top roundels, from left to right, we see St. Albert the Great, patron of the House and of natural philosophy; an angel; St. Thomas Aquinas, patron of theology; St. John and Our Lord at the Last Supper; St. Raymond of Penafort, the patron of Canon law, contemplating the Cross; another angel; and, finally, and St. John of Gorkam, who was martyred by the Calvinists in the Low Countries for bringing the Eucharist to Catholics in prison for their faith. The selection is very suitable for the House of Studies as it includes the patrons of theology, philosophy, and canon law, the major disciplines studied there. The other images are chosen because of their links to the Eucharist. Here is the Lavabo card: 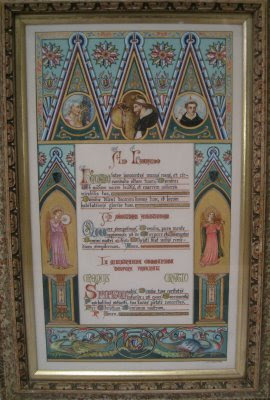 In the left roundel , you can see St. Hyacinth of Poland, who carries a statue of the Blessed Mother, as he did when leading the Polish Dominicans to safety during the Mongol invasions. To the right is St. Vincent Ferrer, the great preacher, who was heard by people in their own languages--thus the fire of the Spirit of Pentecost over his head. In the center quatrofoil, St. Dominic mediating on the Cross. Those with sharp eyes will notice the the Dominican form of the Lavabo psalm is shorter than the Roman. Finally, here is the Last Gospel card: 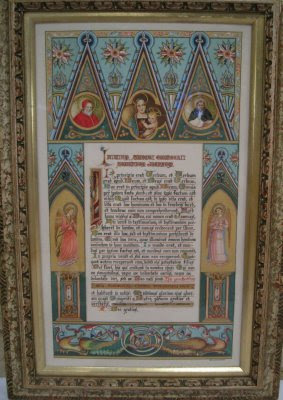 To the left, we see St. Pius V, the reformer of the liturgy and pope of the Battle of Lepanto. As this victory over the Muslim invaders was through the intercession of our Lady of the Rosary, the Virgin and Child are in the center. Last, to the right, is St. Peter of Verona, also known as St. Peter Martyr because he was murdered by Cathar heretics in 1253. He is shown in his traditional form, reminding the friars to keep the Silence. Those with a very sharp eye will notice a tiny error in the punctuation of text of John's Gospel: it is the Roman form, not the Dominican. For more on this see my posting here.
Posted by Fr. Augustine Thompson, O.P. at 6:11 PM

Thanks for sharing Fr.

The cards are really beautiful, the calligraphy is well done, with nice, modest flourishing. The combination of gothic and uncial hands looks pleasing to the eye. One eyes need to be used to these kind of lettering to read the text fluently. I love the idea or displaying Jesus Christ in the center, flanked by relevant saints and angels.

I notice that the Dominican Orate Fratres has a sligthy different wording than the Roman.

Yes, the Orate is different, and there is no response to it.

Dear Father,
Thank you for sharing these images. They are lovely. I am curious about the medium...gouche? Ink? The Neo-Gothic style can be easily overdone by the hand of an enthusiastic artist with a strong decorative inclination. This work shows appropriate restraint even as it is appropriating Fra Angelico's work. Hmmm...early Post-Modernism in the convent?jb.

I believe that the medium is India ink on real vellum for the text. And that the illumination is in oil. But you might write to the nuns of Menlo Park where the work was done (include a mention of this site and posting so they know what you are writing about. They could also tell you who the calligrapher and the illuminationist were.

The Menlo Park Monastery is at: http://www.nunsmenlo.org/ and their email is: nunsmenlo@comcast.net

I found this site using [url=http://google.com]google.com[/url] And i want to thank you for your work. You have done really very good site. Great work, great site! Thank you!