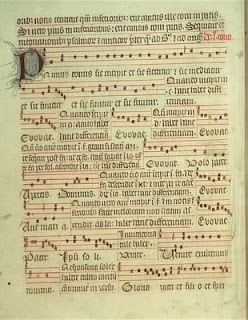 I am pleased to announce that, through the work and kindness of Br. Gregory Schnakenberg, O.P., we now have available for consultation and download on the left side bar here at Dominican Liturgy a scan of the Tonorum Communium iuxta Ritum Ordinis Praedicatorum Regulae, usually called the "Regulae Cantus," published in 1965.

This booklet revised the traditional manner of chanting the pslams, readings, and prayers, conforming them to the Benedictine/Roman method developed by the monks of Solesmes. The traditional Dominican melodies were preserved, but the way in which they were adapted to the Latin words was changed to match the general practice of the Church. This book is not merely of historical interest as the method of psalm-singing in it is that in use by Dominican houses, such as the Angelicum in Rome, which sing the Liturgia Horarum in chant. This booklet also provides the norms for prayers and readings when Dominicans celebrate the Roman Ordinary Form Mass using our own musical tradition, as was provided for in the Rescript of 1969 by which we adopted the Roman Rite.

Those who would like to compare this music with the original Dominican methods may find the pre-1965 rules in the Processionale, also available for download on our side-bar. The original tones are also available on line in the Poissy Antiphonal of 1335, which is also linked from the side-bar. A page of that manuscript decorates this posting. Those who know the Benedictine music will immediately notice the much reduced number of terminations in the Dominican use (only 16 total for the eight tones) and that the chants for the Epistle and Gospel match those listed in the Roman Gradual as "ancient more authentic tones."

This booklet also includes the music for the Psalms and Antiphons of Dominican Rite Compline using the new method and provided with Solesmes marks. The only other Dominican music books using the Solesmes notation system produced were those for Holy Week and Compline. I hope that we will eventually be able to make those also available. As this seemed a suitable time, I have also reposed here at Dominican Liturgy my short explanation of how to interpret and sing Dominican chant.
Posted by Fr. Augustine Thompson, O.P. at 8:14 AM