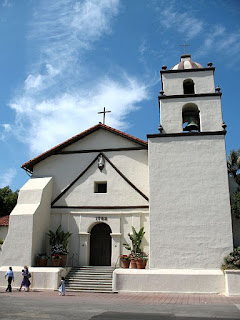 First a picture of San Buenaventura Mission in Ventura, California. This mission has had Sunday Mass in the Extraordinary form of the Roman Rite for a good number of years at 1:30 p.m. on Sundays. For the last two or so, Fr. Paul K. Raftery, O.P. a Dominican of the Western Dominican Province and chaplain at St. Thomas Aquinas College in Santa Paula has been supplying there, celebrating the traditional Dominican Rite Mass. 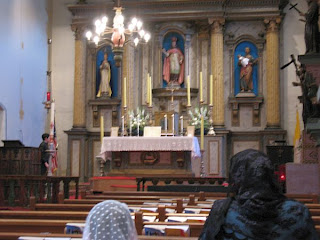 In this photo see the interior of the Mission with a view of the High Altar, prepared for a Missa Cantata in the Dominican Rite on Sunday April 27, the day traditionally called the Fourth Sunday after the Octave of Easter in the Domnican Rite. 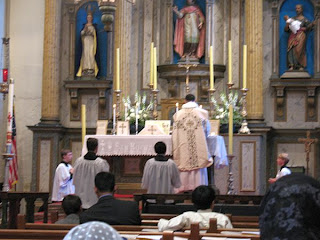 This image shows Fr. Paul at the Epistle Side after the Prayers at the Foot of the Altar. This is his position during the reading of the Officium (as we call the Introit), the Kyrie, the Gloria, Collect, Epistle, and the intervening chants. Fr. Paul read all of these quietly as the schola sang them, except for the Collect and the Epistle, which he himself chanted according to the Dominican tone. We only have one tone for the Epistle and it is similar to that found in the Roman books as "an ancient authentic tone." As this is a Mass in Easter time the two chants are both Alleluias. 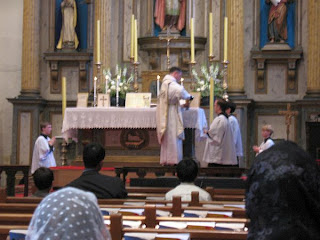 In the Missa Cantata according to our Rite, the chalice is prepared at the altar as Fr. Paul is doing here, while the choir sings the intervening chants. In the Solemn Mass, it is prepared at this point, but by the ministers at the sedilla (the single bench used by all three major ministers in our Rite). The famous Dominican preparation of the chalice before the Prayers at the Foot of the Altar is only done in the Low Mass. 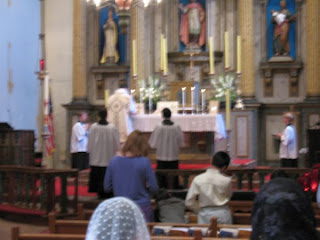 In this image, Fr. Paul has moved to the Gospel side of the altar to sing the Gospel. We have only one Gospel tone, and it is similar to one of the Roman ones. After this, Fr. Paul preached his sermon. 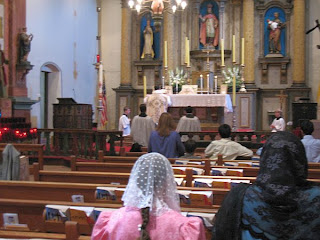 Here we see the genuflection at the Incarnatus est of the Creed, which Fr. Paul has been reading quietly as it was sung by the choir and congregation. Normally the priest in the Dominican Rite moves to the center of the altar to make this genuflection, but it is not unknown for him to do it more Romano at the book, as Father does here. In our books there is actually only one truly Dominican Credo, it is similar to the Roman Credo I. 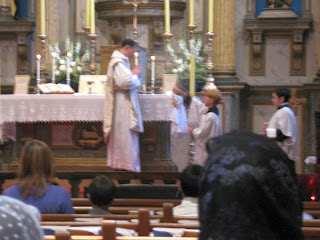 Here the thurifer is incensing Father Paul at the Offertory. The thurifer will incense the two acolytes during the singing of the Sanctus. If this were a Solemn Mass, that would also be the time when he would incense the deacon and subdeacon. Our Offertory is made in a single oblation of Host and Chalice together. And, of course, the chalice has already been prepared at the intervening chants. 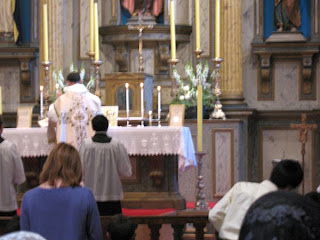 Here Fr. Paul is reading the Sanctus and about to begin the Canon as the choir and congregation sing. At this point a Sanctus Candle (or several) may be lighted. You can see it as the very small candle between the last two o nthe Epistle side in this photo. 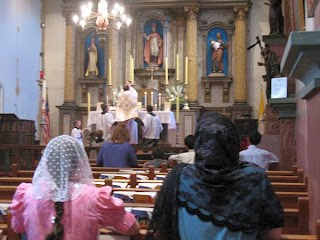 The Elevation of the Host. In the Dominican Rite the Sanctus and Benedictus are properly sung together, so after the elevations there is silence until the doxology of the Canon, even at a Missa Cantata. 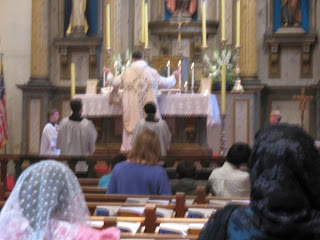 After the elevations in our Rite, the priest extends his arms moderately to form a Cross, calling to mind the Sacrifice of Calvary, which is re-presented for us at Mass. This posture is maintained until the blessings at the end of the prayer Unde et memores, at which point the usual close orans posture is resumed. Note we do not extend our arms all the way in this cross posture, unlike the Carthusians and Carmelites (I believe). 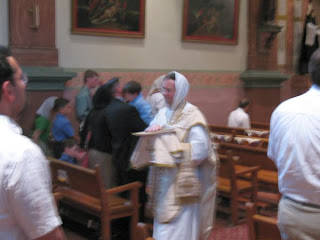 Here we see the procession leaving the church. Unlike secular clergy who wear birettas in the traditional rite processions, the Dominican practice is to raise the capuce (here covered by the large Dominican style amice) coming in and going out. 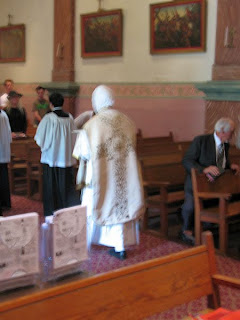 And finally we close with a view from the back of Fr. Paul Rafterty, showing the capuce and amice.

I am told that the servers at the mission have gone through the trouble to learn two sets of responses, those for the Roman and those for the Dominican rite. They are to be congratulated and thanked.

Credit to California Roamin' Catholic for these lovely photographs.
Posted by Fr. Augustine Thompson, O.P. at 6:02 AM

It is interesting what you said about the Sanctus candle because I had only experienced the single candle on the Epistle side of the altar.

But the question remains about the Code of Canon Law about only being able to celebrate ones own rite. I know that this is primarily an East v. West issue but unless I am off base it technically would apply to say a Dominican celebrating the Mozarabic Rite, ad libitum, for instance.

On a related point would you agree with my statement that Summorum Pontificum liberalizes the use of the Roman Rite (usus antiquior) for all religious communities even those who had their own rite (or in the case of the Capuchin tradition of the so called Franciscan Use) prior to the universal adherence to the Modern Roman Rite?

You can find references to the candles and the large candelabra in Caerem. nn. 468, 518, 1000. The exact number lighted depends on the feast and it is somewhere in the Missal rubrics (to which these norms refer. I don't have the facility to hunt it out now. I have seen pictures of this in pract. You can see them in use (although not yet lighted) in the picture for the Gospel in the post here on the Solemn Mass. The numbers lighted are 6, 4, or 2, depending on the rank of the feast. The practice you have seen is that of Low Mass.

Whatever the CIC says on "one's own rite," remember that since 1969, the "rite of the Order" is the new Roman Rite. In the section on canonical status on the side bar, I cover the older (pre-1969) discipline protecting our obligation to use our own liturgy.

Summorum Pontificum gives to all priests of the Latin Church the right to use the old Mass, that includes regulars who previously had their own rites. I don't know what it means for the Carthusians, who still have de iure their own rite as the only use. But this would apply to Masses that are not the community Mass. SP says that Community Mass is only to be in the old Rite if the superiors agree to it. See the canonical status link for more.

Can´t see how to compose identity. Why are these sites so complicated. I am a dom friar. Is that enough. I have celebrated the Dom rite using Bonniwell, the Missal of 1965 which has a liturgicl calender until 2016 and the memories of friars now in their 70´s and 80´s. I supect that even with the rigourous rubrics different provinces had their own interpretations. Why do the servers face one another? Bonniwell only makes mention of this in the Solemn High Mass. Why is the Sanctus Candle on the Altar when different doms have told me it was on the credence and extinguished after the ablutions and not after the priests communion. Do dominicans incense the altar at the beginning of mass as the romans do during the kyrie or is the offertery the first time they incense the altar? Hope someone sees this before the Feast of St Catherine.

If you cannot put in with an identity, just sign your message with your name at the end of your post.

Yes, different rubrics were used in different provinces, as I have explained on a number of times in the posts on this site.

It is hard to answer your question about why the servers face each other. They do so at any number of times in the Missa Cantata (which this was), as is explained in the Latin rubrics of the missal and in Bonniwell's ceremonial, which you say you have.

And no, in the Dominican Rite the altar is not incensed at the beginning of Mass in the Missa Cantata or in the Solemn Mass. In both cases the first incensation of the altar is at the Offertory (but the servers and minor ministers are incensed later, during the Preface).

Why don't you register for the conference in Oakland in August? There you will have a chance to learn the rubrics from priests who have been celebrating the Mass in all its forms continuously since 1969? We would be happy to help you learn to celebrate properly.

It is great to have older priests instruct, but it is better to have those who were taught by "older" priests in the 1970s and have been celebrating ever since as your teachers.

Thank you so much for your response. Not all doms are in favour of the desire to celebrate our own rite. My own province is very progressive, and very Novus Ordo, however, those who are not in favour will still look at this website and see names they recognize. They dont have these hangups in the US. How much is the conference going to cost? Where will we be accomodated? Do we bring a flask and sandwiches or will be fed? I would like to go very much. My email address:lurganshannagh@yahoo.com