New on Dominican Saints and their Cults 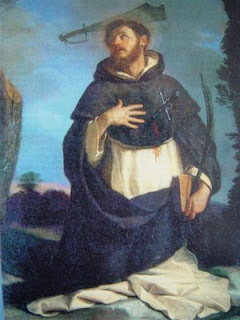 On this the day after the traditional feast of St. Peter Martyr, O.P. (new calendar: June 4), I have the pleasure to announce two important new studies on Dominican saints and the history of devotion to them. Both are by my former doctoral student at the University of Virginia, Prof. Donald S. Prudlo, now assistant professor of ancient and medieval history at Jacksonville State University in Alabama. This first is his book, The Martyred Inquisitor: The Life and Cult of Peter of Verona (+1252), newly out from Ashgate Publishers in their series "Church, Faith and Culture in the Medieval West." It is now the standard work on St. Peter Martyr himself. This study not replaces and corrects the series of articles by Fr. Dondaine, O.P., published in 1953 and till now the only scholarly study of the saint, it also traces Peter's cult in liturgy, art, music, and sermons until the end of the middle ages, something never traced before. An example of one of the altarpiece painting dedicated to him can be seen to the above right.

Peter was born in Verona to a family tainted with Cathar dualism, but already as a student he turned strongly against that heresy. He entered the Dominican Order in Bologna and became famous for his preaching, converting Cathars and Waldensians, and strengthening the faith of Catholics. He was involved in city politics during the conflicts between factions professing support for the pope and emperor, especially at Florence, where he was involved in organizing popular resistence to the imperial faction. Prof. Prudlo's lively treatment of these street fights are among the most exciting parts of the book. In 1252 he was appointed papal inquisitor in Lombardy, an office he held for about six months, during which, Prof. Prudlo tells us, we only know of one juridicial action: a decree of clemency. Peter was hated by his heretical adverssaries and in the spring of that year a plot was hatched in Milan to have him murdered. During the Easter Octave, he was waylaid on the road outside of Como by a pair of thugs and cut down by blows to the head. He and his two socii had just finished singing the Victimae Paschali Laudes. Prof. Prudlo has reconstructed in detail the events of that last day, for which the investigation records still exist. In the middle ages, his cult rivaled that of St. Anthony of Padua, and he was known in Ireland as patron and deliverer of women in childbirth.

Peter's murderer, the hired assasin Carino of Balsamo, is the subject of Prof. Prudlo's article, ”The Assassin-Saint: The Life and Cult of Carino of Balsamo", Catholic Historical Review, 94 (2008): 1-21, just out in the January number of that journal. Carino escaped from prison in Milan where he had been arrested following the murder. For thirty or so years he wandered throughout Italy as a fugitive. Then one day he arrived at the Dominican priory in Forlì, where he asked to go to confession. As a penance, he became a lay brother, taking the name of Peter, and so he became a domestic of the monastery and died in the odor of sanctity. Soon a local cult grew up around his grave and he was venerated as a model or repentence. You can see his shrine effigy in the image. Devotion continues in Emilia and Romagna in Italy, even if the blessed Carino never made it into the official Domincian calendar.

If it was possible for Carino to become a saint, I would say Grace can save any of us.
Posted by Fr. Augustine Thompson, O.P. at 12:14 AM