Dominican Use of the Flabella

One of our readers has been kind enough to send me scans showing the use of flabella in the Dominican Rite. As most of you know the original use of flabella was to ward away flies and other pests from the Precious Blood and the Host. Later they become more a symbol of honor, but could always be used for their traditional purpose. Although I knew that the rubrics for the Dominican Mass provided for the use of these "liturgical fans," I had been under the impression that they had fallen out of use everywhere by the early modern period. Here, however, we see them in use in Malta at a Mass in late April or early May, 1960. It is the First Public Mass of Thanksgiving of Fr. Albert Felice Pace, O.P., who had been ordained on April 2 of that year. The Mass was that of the Third Sunday of Easter Time. 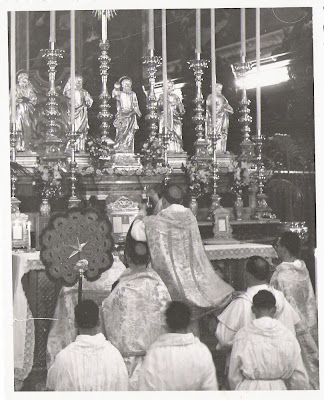 This first image shows the elevation of the chalice. At the priest's left, almost hidden by the flabellum, kneels the "archpriest," who is guiding Fr. Pace through the Mass. The use of an archpriest was allowed only on the occasion of a First Mass, otherwise Dominicans were expected to know the rubrics well enough to celebrate without assistance. You can see the triangular formation of the ministers that I described in my earlier series on the Dominican Mass. The subdeacon kneels on the left, flanking the deacon on the right, and wears the humeral veil with which he is holding the paten. The deacon is lifting the back of the chasuble and continuously incensing the elevated species. The thurifer kneels directly behind the priest between the two acolytes (one is visible here holding his flabellum) to form the bottom row of the triangle. The two young men in albs are "sanctuary boys," present pro causa solemnitatis. The thurifer is not lifting the chasuble, by the way, that is a trick of camera perspective.

The observant will notice that the Dominicans in the picture have the friars' tonsure or corona, which is three fingers wide and so wider than the monks' tonsure. They will also notice that the deacon does not have the tonsure--he is a diocesan priest who was a friend of Fr. Pace. The acolytes and sanctuary boys are parishioners and not clerics, so they don't have the tonsure. 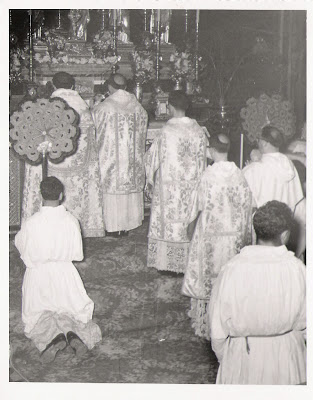 This next picture shows the formation at the end of the Pater Noster. The major ministers now form the line down the steps. The subdeacon has given the paten to the deacon and lost his humeral veil. Next to him stands the thurifer. In a minute, the deacon will give the paten to the priest, who will kiss it. The deacon will take up the pax instrument from the altar and present it to the subdeacon, who will present it to the thurifer. He will then take it to any clerics in choro for them to kiss, a task that could also be performed by the crucifer. Some, I am sure, will notice that the archpriest needs to get his corona renewed.

Fr. Albert Felice Pace is now a member of our Western Dominican Province and currently the director of our Newman Center at the University of Nevada, Los Vegas. I thank Fr. Pace for the permission to post these pictures.
Posted by Fr. Augustine Thompson, O.P. at 9:44 AM

Labels: Flabella in the Dominican Rite