The Dominican Rite, both for the Mass and Office is famous for its stability and resistance to liturgical changes.  And, at least for the text of the Mass, this is certainly true.  The Office, however, after resisting many changes affecting
other Latin rites, such as the adoption of the reformed hymnal of Pope Urban VIII, did conform to the new Psalter arrangement of the Psalms in 1923.

My recent historical work on the history of the Dominican lay brothers (today called "cooperator brothers"), included reading through the nine volumes of Acta of the Dominican General Chapters from 1220 to 1843.  As I was doing this, I noted the legislation that reformed or modified the liturgy.  Here are the major reforms.

For me, the most suggestive piece of legislation was not directly liturgical, but involved the preparation of priests.  In 1345, the General Chapter at Manresa, required that the prior of the local priory (priestly formation was the responsibility of each priory in those days) make sure that any friar to be ordained "understand the Canon of the Mass from the Te igitur to the Pater noster. Ignorance of the meaning of the Latin was such a problem that neither subpriors or vicars were allowed to make this decision.  But now on to liturgical changes.

Today some of the most controversial issues for Catholics in church involve how to show respect to the altar, cross, and Blessed Sacrament.  In the middle ages, the profound bow was the usual way of showing respect.  The Dominican Rite only slowly adopted genuflection that became the Roman practice in the later middle ages..

The General Chapter of Rome 1569 (Acta Capitulorum Generalium S.O.P., 5: 90) explicitly required that the priest bow ("inclinet") after each of the Consecrations, a clear sign that some Dominican priests were imitating the Roman practice of genuflecting.  This chapter also strictly forbad the priest to say the Words of Institution in the Canon out loud, "which certain priests are doing contrary to many chapters and the decree of the Council."  It was only some forty years later, at the Paris General Chapter of 1611 (ACG 6:145) that the Dominican Rite finally suppressed the use of bows at the Consecration and Elevation, replacing them with the modern four genuflections. This was also the point that the rite adopted the use of a genuflection before and after touching the Sacred Species, a practice often considered traditionally Dominican.

Introduction of genuflections where the medieval Dominican Rite prescribed bows had actually begun earlier than that.  For example, the General Chapter of Rome 1569 (ACG 5: 90) instructed the priest to simply bow while all others present knelt at the words Incarnatus est in the creed.  Rome 1580 (ACG 5: 192) then introduced kneeling at the word "procedentes" in the Epiphany Gospel, during the Te Deum, and at the word "vereremur" in the hymn Tantum Ergo, "following Papal Chapel example."  And finally the chatper of Lisbon in 1618 (ACG 6:300) confirms for general use the "pious custom" in Spsnish Provinces of kneeing at the words "Eia ergo" in Salve Regina.


Early modern chapters also changed the texts of the medieval liturgy and modified rubrics to conform to Roman practice or developed theology.  For example, the Rome Chapter of 1569 (ACG 5: 102) changed the collect of Pope St. Gregory the Great from "ex poenis aeternis" to "ex poenis purgatorii," to reflect the developed doctrine of Purgatory.  Famously, and against considerable resistance, the Chapter of Rome in 1589 (ACG 5: 281) mandated the reading of the Last Gospel at the end of Mass, as in the Roman Rite.  Later, the chapter of Rome, 1656 (ACG 7: 390) required that the priest at Solemn Mass read the Gospel quietly before deacon chanted it, duplication finally made optional by rubrical reforms in 1060.  I find nothing about the priest's reading the Epistle quietly at sung Mass. Probably introduced by custom about this time like the Gospel.  Another change in practice, that of Rome 1656 (ACG 7: 394), which rquired the priest is to say the Sign of the Cross and the verse "Confitemini Domino" in a loud voice at Low Mass, which explains this practice during the use of the "moderate" voice during the Prayers at the Foot of the Altar, something I have often wondered about..

The early modern period also so introducted ritual changes that friars often think of as dating back to the
days of Humbert of Romans in the thirteenth century.  Take, for example, the lighting of the Sanctus Candle during the Canon at Low Mass.  This was not made obligatory until the Rome Chapter of 1580 (ACG 5: 169), although it does seem to have been a custom at Solemn Mass already.  This introduction was again approved at Lisbon in 1618 (ACG 6: 296).  Bologna 1625 (ACG 6: 241) introduced the wearing of the cope and stole when incensing the Sacrament during Benediction, as well as requiring the singing of the Litany of the Blessed Virgin during the procession after Compline on Saturdays.  Finally, in 1622, the Chapter of Milan (ACG 6: 325) introduced the "Dominican" practice of moving to center of the altar for the Dominus Vobiscum when Mass is before the tabernacle so that the priest's back not be turned to the Sacrament.  This is a clear sign that Dominicans were adopting the modern practice of reservation of the Sacrament on the main altar.  This chapter also introduced the practice of  priests wearing the stole over their cappas when receiving Communion on Holy Thursday, as well as placing over the cappa of a deceased friar prior to interment.

I had always wondered about the origin of the idea that medieval friars broke sleep to rise for "Midnight Matin" and then returned to their cells for a couple hours rest before Lauds.  This was not the case.  In the middle ages, the friars rose early, usually around 3 a.m. to sing both Matins and Lauds together, finishing before dawn.  I now know that the first example of breaking sleep is only witnessed at the Chapter of Valencia in 1647.  It was then confirmed at Rome in 1650 (ACG 7: 282), where the "usus" of rising for "Midnight Matins," is required of all priories in the order, "according to the custom of the provinces as to when midnight is."  This is the first time Matins is separated from Lauds as a "midnight" office."  But small houses, at least, could rise before dawn for the traditional single office of Matins-Lauds.  In the north the combined office of Matins-Lauds should be at 4 am in winter and 3 am in summer, as it was usually in all the middle ages.

Finally, I now know when the Order finally adopted a ritual for distributing Communion to the laity present 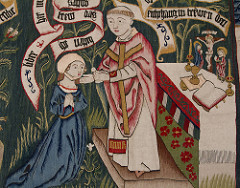 at conventual Masses, something not done in the middle ages.  The Chapter of Rome, 1583 (ACG 5: 239) provided as follows:  First, the Confiteor was recited by the laity with the priest giving the two absolutions.  Then he asked each communicant, "Credis hunc esse verum Christum Deum et Hominem?" as he displayed the Host.  The recipient responded "Credo" and then recited the formula "Domine non sum dignus, etc." three  times.  The priest then gave Communion using the usual formula, "Corpus Domini nostri Iesu Christ," etc.

I have also found some interesting legislation on music and the use of the organ, but will save that for another posting.
Posted by Fr. Augustine Thompson, O.P. at 7:55 AM

Thanks for your comments!

Thank you! A fine example of how the liturgy was never as static as is sometimes thought. In an Order as old as ours we can probably say at times, "Oh, that is modern! We didn't start such-and-such a thing until 1650!" :-)

The same indefatigability which brought us your eye-opening work on St Francis now turns over liturgical stones to find the facts underneath the patina of piously received notions.

By any chance in your lectio capitularis, did you run across any information about when the Rosary became part of the habit?

Regarding "Midnight Matins," Fr. Bonniwell wrote in History of the Dominican Liturgy (page 17) that St. Dominic "he was most faithful in attending choir, assisting at the midnight office as well as at the office of the day" and "When his last illness overtook him, though death was but a few days distant, he insisted upon attending the midnight office with his brethren." and cites the acts of canonization.

On page 134, he wrote under Matins: "Some time during the night, between midnight and three o'clock in the morning, depending upon the time of the year and the ruling of the prior, the friars arose for the "midnight" office. As soon as they were awakened, they recited, while yet in the dormitory, the office of the Blessed Virgin. When it was finished, "a second bell summoned them to choir without further delay."

I am not sure what the intention of your post is. Bonniwell is simply saying what I did. In the middle ages (and up to the early modern period, friars raise between 3 and 4 am to sing Matins-Lauds.

The idea that they got up at midnight, sang Matins and then went back to bed, only to get up just before dawn for Lauds is a mistake. The custom of "breaking sleep" only appeared in reform convents in the early modern period. When Bonniwell uses "midnight" he is, as is obvious from his use of the phrase "between midnight and three." In fact, he has is slightly off, perhaps because he is himself a believer in the old breaking sleep myth.

By the way, please do not post as "unknown" or "anonymous." Use at least a nickname.