Dominican Use of the Capuce 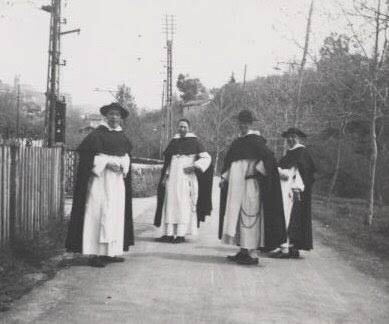 This post is at the request of a commentor who wanted more information about choir rubrics and the capuce (habit hood) in the Dominican rite.

Historically men have worn hats, or at least they did until John F. Kennedy made going bareheaded fashionable, and the Capuce is the "hat" of the Dominican habit. The capuce is one of the three parts of the white Dominican habit and has a short shoulder cape attached to it. It is worn over the scapular, which is wore over the tunic. There is also a black version, which is worn over the white one when the cappa (a long black cape) is worn. The raising and lowering of the capuce is analogus to the lay practice of doffing one's hat, and to the parallel use by secular clergy of the biretta. The capuce is the only head-covering used by Dominican friars, with the exception of the doctoral biretta worn by those with ecclesiastical academic titles. And those birettas are never used in liturgical functions. Of course, this rule did not prevent wearing of a black zuchetto to cover the tonsure or, today, baldness. Well, at least that is the theory, and perhaps it was so in the Middle Ages. Photographs of friars working outside in habit under the sun, wearing wide staw hats, can be found from the 1800s in our province archives. And I have seen plenty of pictures of friars from my province at the Angelicum in Rome, some as recent as the 1980s, showing them wearing the cappello romano, the broad-brimmed Roman clergy hat. To the above right is a photo of some Angelicum students in the early 1950s on an excusion in the country outside of Rome, with their "Roman hats." 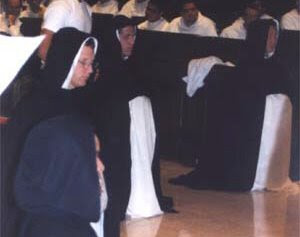 Today the use of the capuce in choir depends on local custom (and climate), but the one case where it is always kept raised is during vestition, when the capuce remains raised from the clothing until the provincial greets each new novice with the Kiss of Peace, something always part of our vestition ceremony. In the image to the right, you can see four of our Western Province novices in 2001 just after clothing with their capuces up.

Before discussing the raising and lowering of the capuce in the traditional rite, a couple of general observations are in order. First, although the practice was never completely uniform (cf. Caeremoniale S.O.P. (1869), n. 536), the practice was, and is, for non-priest friars to remove the capuce before putting on the surplice and then put it back on so that the shoulder cape is on top. Priest friars wear the surplice over the capuce and shoulder cape, so only the hood is visible. The practice with the alb and amice has changed over the years. In the Ordinary of Humbert (1256), the capuce was removed before putting on the amice and alb. Although this was later changed, many friars, to this day persist in removing the capuce before vesting with the alb, a practice regularly reprobated by liturgists of the Order into the 1960s. The problem is that the shoulder cape tends to bunch up under the amice and alb. To prevent such unsightly bumps, the deacon and subdeacon were to help the priest vest and then help each other vest (Caeremon., n. 808).

Now on to the rubrics for the use of the capuce. Traditionally men wore hats or head-covering, and the capuce is the head-covering of the habit. So, it was a general rule that when friars went out in public, they were to have the capuce up, just as laymen wore hats. And so one can see in the wood-cut to the right showing St. Dominic traveling. (You can also note that he has taken off his shoes and hose to prevent wear and tear on them as he walked along; he has them in a bundle on a stick over his shoulder). The covering of the head by the capuce was also assumed to be the norm in the monastery, although this seems not to have been universally practiced. It was, however, a rule to drop the capuce in public when preaching, and when passing before a monumental image of Christ Crucified, the Blessed Virgin, or one of the saints. A number of older friars in my province remember this practice of lowering the capuce when they passed the statute-shrines of the Dominican saints that face each stairwell of the our House of Studies in Oakland. And, of course, if the Blessed Sacrament passed on the way to the sick, or was carried in procession, the capuce was lowered. By custom, it was also lowered as a mark of respect generally, as men doffed their hats.

When the ceremonial spoke of use of the capuce at Office and Mass (nn. 378ff.), it was assumed that it was usually up, so the rubrics merely list the times when it is lowered. At Office the capuce was lowered: 1. at the beginning of each hour until the completion of the Gloria Patri (which means, at Compline, also during the short chapter and the Confiteor). 2. At the Magnificat, Benedictus, and Nunc Dimmittis. 3. At the Preces with its verses and Pater Noster. 4. At the Collects (at which the friars also bow). And finally, during the Salve Regina until the end of the devotions attached to Compline. 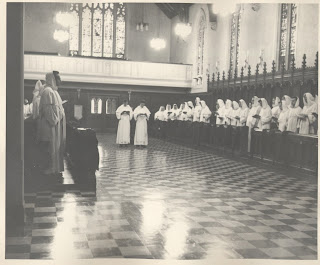 The capuce was lowered when the friars knelt or did the prostration on the forms (except for the prostrations before and after the Consecration). See my previous posting on Prostration on the Forms for this. These lowerings included the recitation of the Litanies kneeling, for example, and blessings at table. The capuce was lowered whenever a genuflexion was made, except for the major ministers coming to the altar at Mass, who genuflected to the Blessed Sacrament with it up (probably because the deacon and subdeacon are carrying the lectionary and sacramentary). This same rule of lowered capuce also applied to the cantors singing verses or entoning chants in medio chori. Here is a picture of office at St. Albert's Priory in Oakland in the late 1950s. The friars in choir have their capuces up, the cantors in medio chori have them down. The position of the cantors shows that the friars are probably singing one of the responsories, and the presence of two (as opposed to one or four) cantors indicates that the day is duplex feast, not a ferial or totum duplex.

The major ministers did not follow the choir rubrics for the capuce during Mass: they kept their heads uncovered from arrival until the recessional. During Mass, honwever, the friars in choir kept the capuce up, except for: 1. The priest's intoning of the Gloria; 2. The singing of the Gospel; and 3. The Elevation proper.

I suspect that most of these practices have very close parallels in the other western rites, as well as the Roman itself.

I would like to take this opportunity to remind readers that this coming August, 2008, there will be two Sung Dominican Rite Masses in the Northwest. The first, a Solemn High Mass of St. Dominic on August 8, will honor the 100th Anniversary of Blessed Sacrament Parish in Seattle. It will be at 7 p.m. in the church, and the celebrant will be Fr. Daniel Syverstad, O.P., former provincial of the Western Province and current pastor there. Then, two days later, on Sunday, August 10, at 11:30 a.m, a Mass for the transferred celebration of St. Dominic will be sung at Holy Rosary Parish in Portland. The celebrant will be the pastor, Fr. Anthony Patalano, O.P. This is currently planned as a Missa Cantata, not a Solemn Mass. I expect to be at both celebrations; if you are a reader and present, please introduce yourself.
Posted by Fr. Augustine Thompson, O.P. at 9:49 AM

What is/was the custom for the use of the capuce during periods of eucharistic exposition. I believe that according to the Rubrics of the Mass the capuce is lowered before the double genuflection if passing in front of the Blessed Sacrament however that doesn't explain if it is permissible to wear the capuce while in adoration such was one would do if in private or common meditation.

The capuce is always lowered in the presence of the Blessed Sacrament exposed. As it is in processions where the Host is carried--even if not exposed.