Candlemas in the Dominican Rite 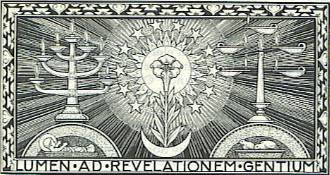 As Thursday is Candlemas, called in the traditional Dominican Rite the Feast of the Purification of the Blessed Virgin Mary, I though that it might be a suitable time to post something about the rituals attached to this feast in the Dominican Rite. These rites are the same in both the 1933 and 1965 Dominican Rite Missals and seem to go back virtually unchanged to the thirteenth century.

After Terce on the feast, the prior, in cope, accompanied by the deacon and subdeacon in dalmatics, who carry the missal and the processional, enter the choir preceded by the acolytes in albs carrying lighted processional candles. If the feast falls on Sunday, the priest performs the Asperges, if not he proceeds directly to the blessing. Standing before the step to the sanctuary, where the sacristan has placed the candles to be blessed slightly to the prior's right as he faces the altar, he sings the blessing in a moderate voice, using the tone for collects at the Hours:

The Lord be with you.
And with your spirit.

Let us pray. Almighty and everlasting God, who on this day presented your Only-Begotten Son to be received into the arms of the Blessed Simeon in your holy Temple; we humbly entreat your clemency that you would be pleased to + bless, to + sanctify and enkindle with the light of your heavenly blessing these candles, which your servants wish to receive and carry lighted to the honor of your name; that by offering them to you, our Lord and God, we being worthy and inflamed with the holy fire of your sweet charity, might deserve to be presented ourselves in the holy temple of your Glory. Through the same Christ Our Lord. R/. Amen.

The Distribution and Nunc Dimittis

The prior then sprinkles the candles with holy water from the stoop held by the acolyte. The cantor then comes forward and offers a lighted candle to the prior and intones the Antiphon Lumen ad Revelation Gentium. It is sung by the community and followed by the chanting of the Nunc Dimittis, during which the antiphon is sung again after each verse of the canticle. This chant is repeated as many times as necessary for lighted candles to be distributed to the whole community.

When all have their candles, the community then moves in procession fashion into the main cloister. The procession has this order, 1. a friar in surplice with the holy water, who sprinkles as he goes, 2. the acolytes with processional candles, 3. the crucifer, 4. the friars, two by two, in order of religion, youngest first, 5. the prior, flanked by the deacon and subdeacon (who carries the book). The procession moves counter clockwise around the cloister, stopping for the four stations, at each of which the acolytes and crucifer turn to the friars so that they can gaze on the cross for a moment. The cantor then intones the antiphon that accompanies the move to the next station. These antiphons are:

At Station 1: Ave Gratia, which celebrates Mary's role the birth of Christ who is light of the world.

At Station 2: Adorna, which calls on all to prepare their hearts, as Simeon did, to be a bridal chamber for Christ, the world's savior.

At Station 3: Responsum, which recalls how Simeon had been promised that he would not see death until he took the Light of the Gentiles in his arms.

At Station 4: Hodie, which recalls how Joseph and Mary brought the Christ Child into the temple. It is fittingly sung as the friars, carrying their candles, reenter the chapel and take their places in their stalls.

The ministers, meanwhile, return to the sacristy and the prior puts on the chasuble for Mass. When the ministers are ready, the friars begin the Officium of the Mass, Suscepimus. Friars hold their lighted candles in their hands until the Offertory. I might add that in the Dominican Rite the famous sequence Laetabundus is sung at this Mass.

When he has finished the Offertory Prayers, the prior receives his lighted candle and comes with the deacon and subdeacon, holding their candles, to before the altar. The sacristan comes up with a basket to receive the ministers' candles, which he snuffs and places in it. The friars of the community then come forward in procession, in order of seniority, enter the sanctuary, and offer their lighted candles, handing them to the sacristan and kissing the prior's hand. When all have offered their candles, the prior returns to the altar, receives the censer, and does the incensing and the lavabo. The Preface of Mass is that of the Nativity.

The Proprium Missarum Ordinis Praedicatorum of 1983 provides that these ceremonies may be incorporated into the Mass of the Presentation in the new Roman liturgy. And this includes the Laetabundus, even if the candle rituals are not done.
Posted by Fr. Augustine Thompson, O.P. at 3:01 PM