As I had earlier mentioned I was in Budapest with the Dominican Sisters of the Congregation of St. Margaret of Hungary from August 4-8, giving them a series of conferences on the history of the Dominican Liturgy and its Spirituality.

I was invited by their Prioress General, Sister Hedvig Deàk Viktória, O.P. The Congregation was founded in 1868 and reached a total of 200 sisters, but then was suppressed by the Communists. A courageous group of sisters, never more than 15, kept the congregation alive in secret, while holding jobs in the secular world as teachers, nurses, and one even as a psychiatrist. They have rebounded since the reestablishment of common life in 1991, and now number just under 40. Today they emphasize education and have sisters teaching all age levels from Kindergarten up, including four professors at Sapientia College in Budapest, the "Sapientia." If readers would like short history of the congregation, they can find it here (in English).

I will prepare a longer post on this eventually, but I wanted to get some photos up now. The first shows the conference room. Sister Hedvig is left in front. The photo also gives some idea of the sisters age distribution. 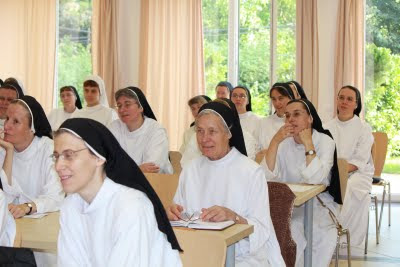 The next image shows me during one of the conferences with the sister translator. No, I did not learn Hungarian for this event: about a third of the young sisters have some English (German is more common for the older sisters) and four of the sisters rotated translating my talks. We had four 90 minute conferences each day for the three days. We also viewed and discussed two videos of Dominican Rite Solemn Masses (one of these was in the evening and "optional" but as far as I could count, all the sisters came). 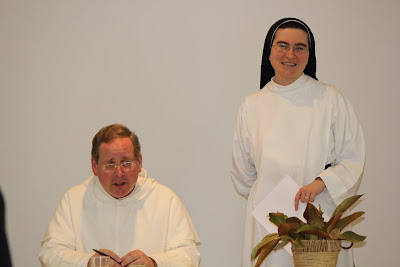 On two of the three days, Mass was in the Ordinary Form in Latin, with music from the Antiphonale Hungaricum, which has the Hungarian Propers set to the Gregorian melodies. This worked very well and the singing was beautiful. The last day, Transfiguration, was a Dominican Rite Missa Cantata. Here is a picture of the Mass during the Gloria. You can see one of the Congregation's two novices in the right left. They also have four postulants this year, but they did not attend the conference. The Conference was held in the guest house of a monastery of Cistercian Nuns outside of Budapest, and this was the chapel that was allocated to our use. And, yes, that is a Eucharistic Dove above the altar. 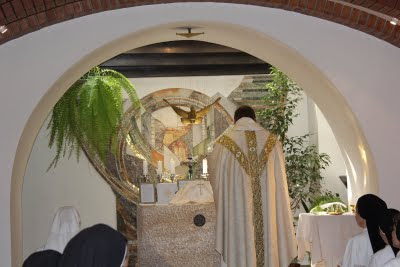 In this last photo, you can see the whole chapel, with the sisters assembled singing the Office. This two was in Hungarian Gregorian Chant. The sisters are working to slowly increase the amount of Latin Dominican Chant in their Office. 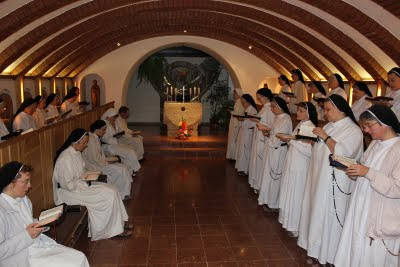 I will try to get a more complete post up in a few days. But this should give you an idea of how this Congregation has been thriving since the end of Communism. I thank them all for their invitation and for their kindness, in particular, Sister Hedvig, whose idea this was.

Who was your server at this mass?

No server was available. A sister in the front replied to the Prayers at the Foot of the Altar, etc. A common practice when a server failed to show at convent Masses before Vatican II.

Just gorgeous! Very inspiring to see their community. What a blessing that conference must have been for them!
And Sr. Hedvig has a lovely name.