Renovation of the Sanctuary at Blessed Sacrament Parish, Seattle WA

Renovations of the Sanctuary were recently completed at the Dominican Church of the Blessed Sacrament in Seattle WA. Our readers have already seen images of the prerenovation building because it was the site for the Dominican Rite Solemn Mass celebrating the parish's 100th anniversary, and for a Solemn Dominican Rite Requiem Mass on All Souls last.

Here is an image of the church before the renovation of the sanctuary: 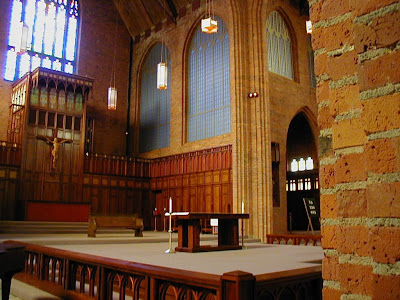 You can see that, after Vatican II, the sanctuary had been extended into the crossing and a modern style portable altar with floor candlesticks was placed on it. Seating faced in from the transcepts and forward from the nave to create a make-shift "church in the round." The old high altar can be seen at the back. The tabernacle previously on it had been removed to a side chapel in the north transcept.

Here is an image after the renovation: 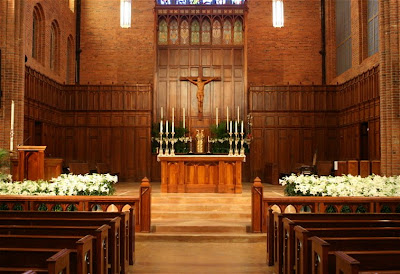 You can see that the tabernacle is now back on the old high altar. A new free-standing altar, suitable for ad orientem as well as ad populum celebration was commissioned and installed. The extension into the crossing was removed, the communion rail put back in its original place. Thus the original configuration of the pews was also restored. In addition, stalls for chanting the office were commissioned to replace the folding chairs previously used in one of the transcepts for this purpose. Note also the "Benedictine" candle arrangement.
Posted by Fr. Augustine Thompson, O.P. at 8:19 AM

Deo gratias!!!! I adore Blessed Sacrament; I go there once a month. All Roman Catholic Churches should say Mass like these wonderful Dominicans do; it is Vatican II as it SHOULD have been applied.