As I mentioned in an announcement some time ago, Fr. Anthony-M. Patalano, O.P., Pastor of Holy Rosary, Portland, celebrated Dominican Rite Low Mass at St. Francis Xavier Mission in Toledo, Washington, on August 18th. Attendance was about 90 at the small rural mission. Fr. Anthony gave a short presentation on the distinctive characteristics of the Dominican Rite Low Mass and how it differs from the Extraordinary Use in the Roman Rite. The 18th in our 1961 calendar would have been a ferial of the 12th Sunday after the Octave of Trinity with the Memorial of St. Agapitus, but as you can see by the vestments, Fr. Anthony celebrated a Votive Mass, I believe of Our Lady.

The three servers had already had experience with the Extraordinary Use of the Roman Rite and did not need much time time to learn the rudiments of serving Dominican Mass. While in some ways very similar to the Roman Rite, it is easy for servers familiar with that rite to "trip up," as, for example, at the Offertory (we prepare the chalice before Mass and do not respond to the Orate Fratres) and in the movements (servers do not genuflect except on entering and leaving an altar where the Sacrament is reserved, making instead a deep bow when passing before the altar), and so on. Considering the short training period, I am told that the servers present did very well.

Here is a picture that was sent to me of the church: 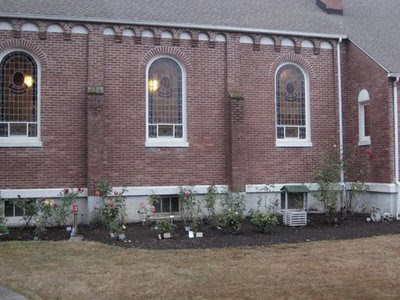 Through the kindness of one in attendance, here are some photographs of the Mass. In the first photo you can see Fr. Anthony with his amice-covered capuce uncovering the chalice at the center of the altar. The two servers are at the left getting the wine and water. They will bring it to him and he will prepare the chalice and recover it. Then he will uncover his head and say the prayer Actiones Nostras quietly before descending for the Prayers at the Foot of the Altar. There is an "extra" server kneeling before the altar. Although it was not a normal practice for us to have "extra" servers at the altar (sanctuary boys are another matter), it was a common Roman Practice and I served as one myself on occasion in the 1960s in my diocesan parish in New York. 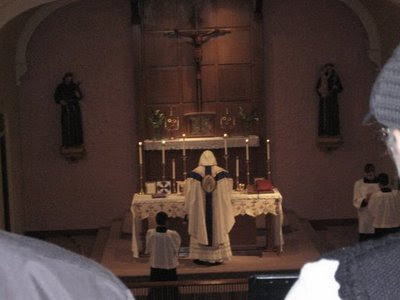 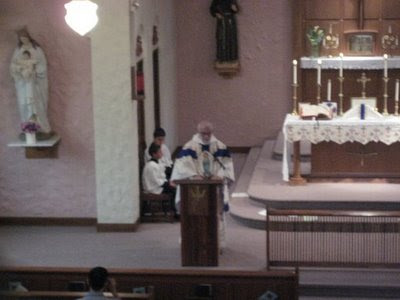 We now jump ahead to the Sanctus. You will notice that the senior server has gone behind the altar to light the Sanctus Candles. A more common positioning of these candles ( and easier to light if the altar is attached to the wall) would be at the ends of the altar. And it is legitimate for the junior server to light that on his own side. But this practice is certainly legitimate. At private Mass there is normally only one Sanctus Candle (and one server) but at a Mass celebrated for the people, like the use of two servers, use of two candles is common. 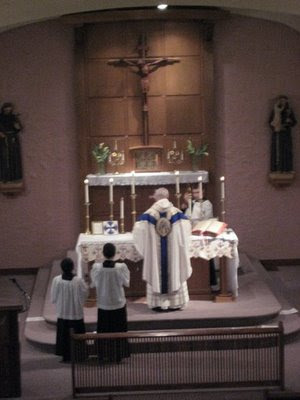 The Consecration of the Host. Note the two lighted candles. You will notice that we do not bow over the altar during the consecration, but make a head bow, like that prescribed for the Ordinary Use of the Roman Rite. 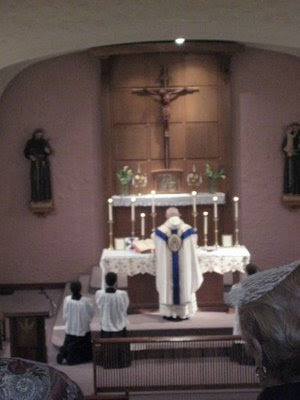 Sorry about the quality of the next photo. We are now at the Last Gospel, as you can see the servers have returned to their places after the dialogue. I notice that they are not following the old Dominican custom of snuffing the altar candles during the Last Gospel. This was the practice in the Western Province, but not in the Eastern Province. I am sure practice varied around the world. Some lay people found it "disrespectful," so it was often dropped. There was considerable resistance when we were forced to adopt the Roman practice of the Last Gospel in the 1600s. Before that priests returned to the sacristy reciting from memory the Canticle Benedicite Omnia Opera Domini (Dan. 3: 57-88), which may still be done. Recitation of John's Prologue after Mass began as a similar devotional recitation on the way to the sacristry. The canticle was common in some places, the prologue in others. The Tridentine Reform happened to canonize the Prologue. I have previously posted on Dominicans and the Last Gospel.

Finally, a photograph showing the recitation of the Leonine Prayers after Mass. As readers know these were added by Pope Leo XIII (and St. Pius X) and are not part of Mass. They are a kind of "oratio imperata" (a mandated prayer) to follow the Mass. And, of course, there is nothing particularly Dominican about them. Nonetheless, they are very commonly recited at Dominican Rite Low Masses I have attended. 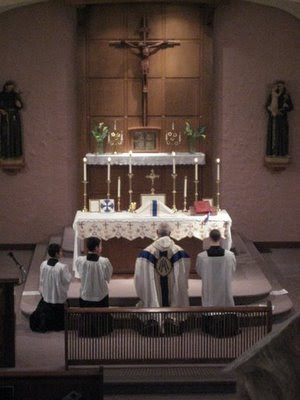 In addition: I have also received news that Blessed Sacrament Dominican Parish in Seattle WA, the site of a very successful Centennial Solemn Mass will be including the Dominican Rite as a regular part of their schedule. I will let you know the frequency and time as soon as I hear.

Thanks to Mr. Scott Powell for these photos. It is my understanding that Dominican Rite Mass will be celebrated at St. Francis Xavier Mission with some regularity in the future. Watch their website for announcements.
Posted by Fr. Augustine Thompson, O.P. at 7:08 AM

As an altar server in the Extraordinary Form, I am happy to read these little details regarding the proper way to serve in the Dominican rite.