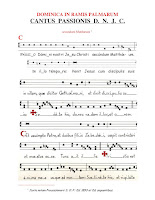 As we begin Leint, I am pleased to remind our remind our readers, especially Dominican friars, that Dominican Liturgy Publications has published in an attractive hardback volume the Cantus Passionis Domini Nostri Iesu Christ juxta Ritum Ordinis Praedicatorum for use in singing the Passion during Holy Week.

This volume contains the music for the Passion according to Mathew and according to John sung on Palm Sunday and Good Friday, which were originally published by the Order of Preachers in 1953 with the minor changes necessary to make the texts conform to the norms of 1962. In addition, it includes, newly set to music,  the Passions according to Mark and Luke, traditionally sung on the Tuesday and Wednesday of Holy Week, but now sung in a cycle with that of Matthew on Palm Sunday.

As the texts of the four Passsions as used in 1962 are the same as those of the current Roman Rite, this book may also be used by friars (and others) celebrating the New Mass in Latin and wanting to sing the chants according to the traditional Dominican music. The cover and a sample age of this volume are reproduced above.  Those interested can read more about this volume and order it here. Those planning to use this volume liturgically should order three copies so that the singers of the narrator and "turba" each have their own copies along the one singing the part of "Christus."
Posted by Fr. Augustine Thompson, O.P. at 9:09 AM